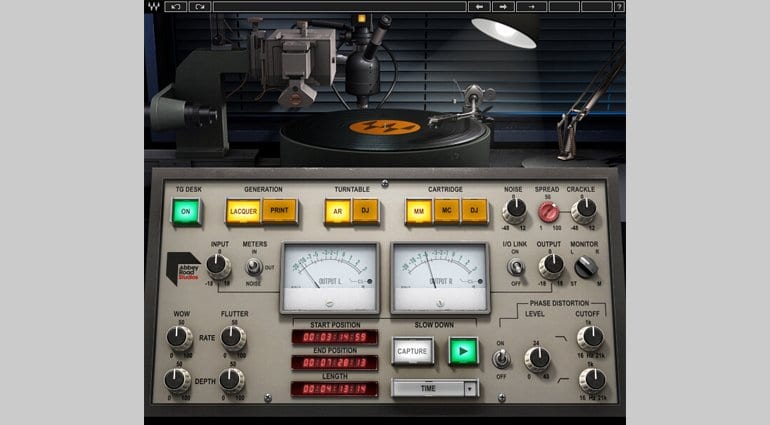 If you’re into vinyl, or perhaps you’re after the sound effect of vinyl for a production, then this might be a plug-in worth watching out for. Announced at AES 2016, there isn’t much information available yet, but initial thoughts are promising.

There are few places left in the world where you can still get mastering cut to vinyl. One of those places however, who continue to hold a world-wide reputation at being amongst the very best, is of course Abbey Road. Who better then, for Waves to emulate their precise equipment. I think this is great to see, otherwise this would have been just another vinyl sound emulator.

This is very recent news so there’s little information available, but it appears there’s actually quite a lot of control with this plug-in. Thank goodness it’s not another one-knob style GUI. Apparently, you can even chose to add Abbey Road’s famous TG12410 mastering console in the path to the vinyl lathe. The last vinyl emulation we saw was iZotope’s free ‘Vinyl’ plug-in, which is great considering it’s free. However, this Waves emulation is a different concept altogether, offering parameters such as; pure acetate or print master pressing, different turntables and needles, noise and crackle, wow and flutter, and phase distortion.

There is one feature which they must have gone to some effort to emulate, but I’m not convinced is a bonus. The plug-in provides the option to emulate the sound of the arm moving across the record, changing frequency response and distortion. This has been a known ‘flaw’ in the medium, which engineers try to minimise – and for good reason. I know that well-known mastering engineer Ian Shephard for example, shares my view that this isn’t a ‘nice distortion’. If you want to emulate this for any reason however, here’s the tool!

There isn’t any information available yet on the Waves website, but keep an eye on their website for further details and pricing.