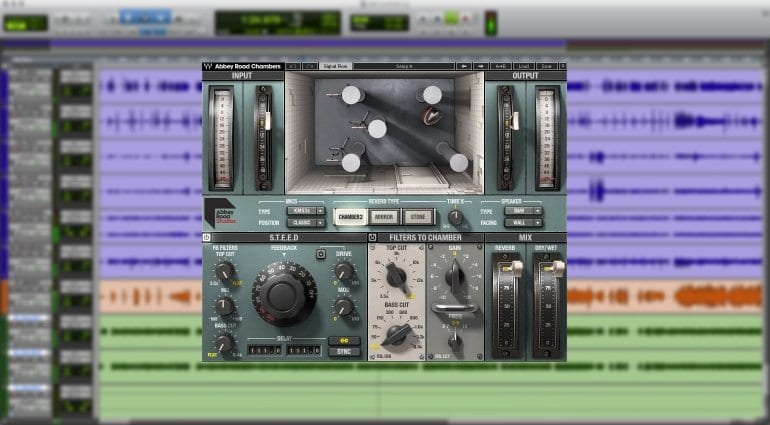 Nostalgia reigns supreme at Waves, who has once again teamed up with the legendary Abbey Road studios for a plug-in. This time, they offer a virtual recreation of the facility’s defining echo chamber, used by engineers to create reverbs, delays, and other kinds of special effects on a plethora of classic records from the 60’s.

Waves Abbey Road chambers lets you enter the Studio Two echo chamber, mic’d up with the original Neumann KM53 valve microphones and Altec 605 speaker, in use on almost all pop records made at the studio in that era. You will also get to peruse the original set of filters – the EMI RS 106 hi/low-pass filter and the EMI RS127 Presence EQ.

Not stopping at that, Waves also simulated the original Abbey Road S.T.E.E.D. (Send. Tape. Echo. Delay.) setup which splits the signal and forms a feedback loop from the REDD console through a separate tape delay, the aforementioned filters, and then to the echo chamber and back. If that’s still not enough, you also get to try two simulated reverb spaces – the Abbey Road Mirror Room and the Olympic Studios Stone Room.

Waves designed the plug-in in a modular fashion, letting you pipe audio just to the chamber, isolate the S.T.E.E.D. effect, or combine both for a complete emulation of the Abbey Road setup. Vintage acoustics galore!

Priced at a regular USD 199, Abbey Road Chambers is currently on sale for USD 29. You can buy it right away in all the usual formats for Windows and Mac computers, or add it to a subscription-based plug-in bundle – read more here.