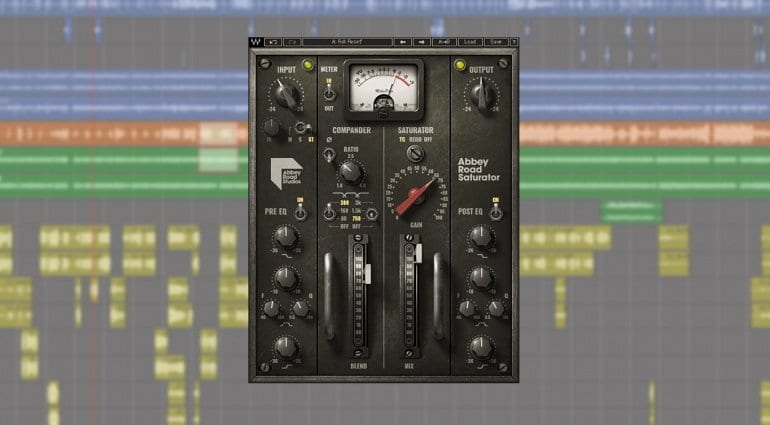 Waves has released the Abbey Road Saturator plug-in, based on saturation chains from two of the studio’s vintage EMI consoles. It also includes the EMI TG12321 Compander circuit for pre-saturation signal enhancement.

After Abbey Road Studio 3, Abbey Road TG Mastering Chain and many others, Abbey Road Saturator is the latest addition to the Waves Abbey Road collection. The plug-in is based on saturation chains from two of the studio’s vintage EMI consoles. Waves says that it delivers many flavours of saturation, from “soft clipping of a tube preamp, which adds warmth and pleasing harmonics” to “full-blown console distortion”.

At the heart of the plug-in are two distinct types of console saturation. One is based on the EMI REDD tube console, while the other models the solid state circuitry of the EMI 12345. According to Waves, the emulations of the consoles’ input, output and gain stages were “calibrated to perfection”.

These two kinds of console saturation are complemented by an exciter section based on the EMI TG12321. According to Waves, Abbey Road engineers use the encode section of the TG12321 compander to add air and high-frequency emphasis to signals. In the Abbey Road Saturator, this section feeds into the console emulations, which Waves says produces a “one-of-a-kind excited saturation effect”. The compander’s crossover frequencies are adjustable, so you can set the effect to suit different kinds of signals.

The plug-in supports M/S processing, which means that you can use it to saturate the centered bass drum and snare, while leaving the sides unaffected, for example. It also includes pre and post EQ sections.

Waves Abbey Road Saturator is available for macOS 10.12.6 and up and Windows 10 and up (64 bit). It comes in VST, VST3, AU and AAX native and Audiosuite formats. If you act really quickly, you can still grab it for the introductory price of USD 49.99. For Cyber Monday, Waves even throws in the MDMX Distortion plug-in for free. After this offer ends, Abbey Road Saturator will cost USD 199.

One response to “Waves Abbey Road Saturator: analogue console saturation for your DAW”

18 May · This same writer slated the Japanese-made Boxer Strats for being too expensive, yet they cost less than half the price of this and don't have all the pointless kiddy bling. Go figure.

18 May · I'd prefer it if Apple spent the time and R&D investment on bringing Logic up to the functional level of DAWs like Cubase. And I say that as a loyal Logic user since 1995