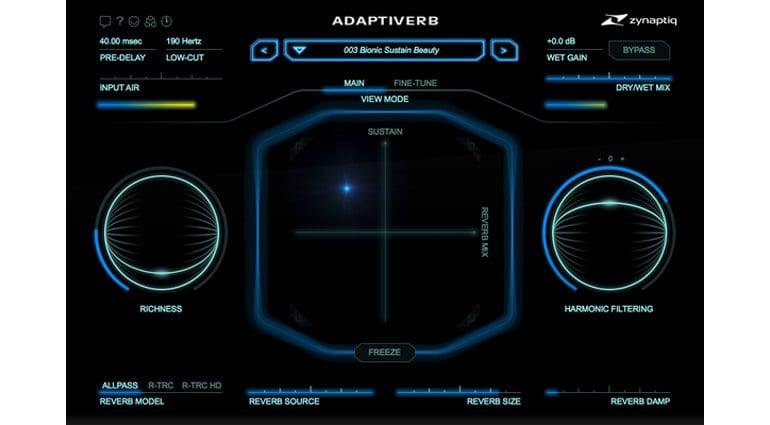 This looks like a really interesting new reverb plugin that doesn’t add reflections or room modelling in the same way conventional reverbs do. ADAPTIVERB analyses the harmonics of your input signal, and outputs a tail based on the harmonic content rather than all noisy elements of your input. ADAPTIVERB can also adapt its tail to suit a changing input, which they claim prohibits the reverb from clouding your mix or pushing elements back in the mix. This is achieved by their own ‘resynthesis’ engine, which also adds a few party tricks to this new plugin.

Zynaptiq are using the term ‘revolutionary’, which I find over-used and misleading. However, this does appear to be a new and very cool way to approach reverb. The idea that a reverb tail is effectively ‘triggered’ by the musical content of your signal, rather than the whole signal, is really interesting. By tracking the changes in the incoming signal, ADAPTIVERB will produce its own tail according the harmonics. What’s really interesting for me is its ability to adapt that tail as the incoming notes change, apparently so that the result doesn’t detract from the part.

It appears there are many possible results achievable from this plugin and whilst this is a form of synthesis, it seems to be surprisingly organic. However, the results surely depend on the ‘resynthesis’ engine that Zynaptiq have built into the effect. It would be interesting to see a similar plugin from another manufacturer or a future update of ADAPTIVERB to hear how they might sound different. However, I’m loving the idea and keen to try it out soon.

I can see this new plugin becoming a powerful tool for composers, sound designers and producers alike. Its ‘freeze’ function can be used to generate drones or pads, which can of course evolve according to changes in harmonics. It seems that there are other creative uses too, such as manual input from a keyboard to follow a changing melody or chord structure. Cross-filtering is also possible, where the tone of an input source can be used to generate the reverb for a different source.

Visit Zynaptiq’s webpage for ADAPTIVERB for more information and to download a generous 30 day trial. Until the end of September, Zynaptiq are offering ADAPTIVERB at an introductory price of 149 USD, after which the regular price will be 249 USD.

ADAPTIVERB is suitable for 32 bit or 64 bit, Mac and Windows systems, in all common plugin formats: AAX, VST, AU and even RTAS.

Here is Zynaptiq’s trailer for ADAPTIVERB found on their YouTube channel.