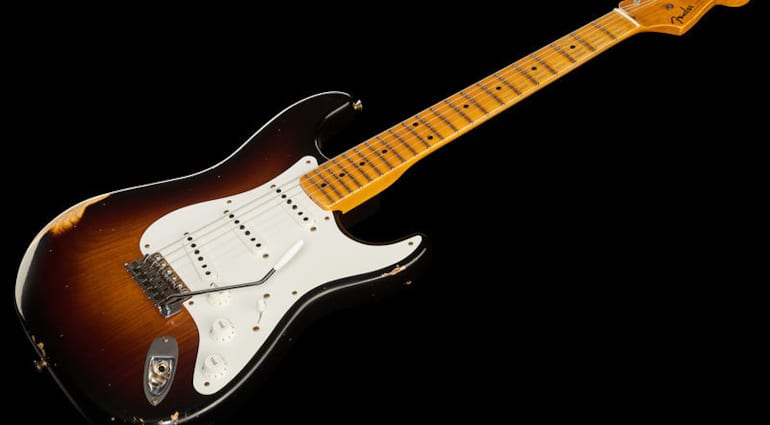 The Fender Stratocaster has been imitated so much since its original release in 1954, that it’s become almost synonymous with the generic image of an electric guitar. But back when it was released, there was nothing like it. Not for miles around. Maybe even light years.

The Genius of Leo Fender

It’s hard to quantify the impact Leo Fender has had on music. Even before he ventured out into revolutionizing the guitar industry with his mass-produced solid body instruments, his amplifiers were electrifying studios and concert halls. And although the Telecaster had already been released a few years earlier, it was the Stratocaster that was truly groundbreaking.

Fender may not himself have been a guitar player, but he did play saxophone, and he certainly had a keen ear and an open mind. Between the years of ‘52 and ’54, he and his team, notably George Fullerton, Freddie Travers, and Bill Carson, made different prototypes and got feedback from players. What they ended up with was a mix of form and function, that 66 years later, is still considered by many a benchmark for bolt-on solidbody guitars.

A Stratocaster is born

The guitar had a double-cutaway body that provided players easier access to the upper register. It had an ergonomic shape with soft edges that slipped comfortably into the player’s body. The top had been bevelled where the player’s arm would rest, and the back had a contoured belly-cut. This sculpted body, although striking, was more a result of function than form. But what a form it turned out to be! In contrast, its only real contender, Gibson’s Les Paul model, was more like a traditional single cut archtop squashed into a solid body format, with more pronounced edges and no comfort contours.

Ever the engineer, Leo Fender designed the Stratocaster as a modular instrument, with parts that could easily be swapped, should the need arise. The guitar had a bolt-on neck that could simply be replaced if it was damaged. It also sported the revolutionary-at-the-time knife-edge vibrato unit, that Fender erroneously called a ‘tremolo’, a term that has slipped into the modern guitar vernacular. The 6 saddles could be individually set-up for intonation and action. Even the output jack, for functional reasons, was moved to the top of the body. Three single-coil pickups could be selected individually using a three-way blade switch, and a master volume and two tone controls.

When looking back at these original, pre-CBS Stratocasters with the perspective of more than half a century, sure, several improvements could be made to suit modern styles. Some players find the placements of the knobs interferes with their playing. The original 7.25” radius can be limiting in certain situations. The three-way switch doesn’t provide all the tones the instrument is capable of. Maybe the neck-heel design could be improved. The ‘tremolo’ unit couldn’t handle extreme use. But back in 1954, there was nothing to compare it to, and the styles that required said improvements hadn’t been invented yet. In fact, a case could be made that without the Stratocaster as a template in the first place, those styles might not have existed at all.

The first Stratocasters had 12 or 13 gauge strings on them, with a wound G, and were likely an alternative for a guitar player who wanted to be heard louder. It would be a while before guitarists figured out what to do with this new instrument. Heavier strings were changed for lighter ones that made bending a whole lot easier. Because now, solo parts could be heard in the context of a band, and the soloist could afford to be more expressive.

Eventually, a cosmic traveller by the name of Jimi Hendrix came to Earth briefly to unlock the true potential of the guitar. I can’t imagine that Leo Fender, in a million years, could have ever thought his creation would be used in the manner that Hendrix did. Or be set alight. Several times.

Hendrix wasn’t the only guitar player at the time trail-blazing with Fender’s creation. But it was as if the Stratocaster was designed for Hendrix. Or the other way around. Hendrix made the guitar uniquely his own, as he made it wail and howl, sing and moan, coaxing hitherto unknown sounds out of the instrument. He’d unlocked the secrets of the modern electric guitar, and went back off into the universe.

Of course, there are several famous Strat players before Hendrix, after him, and around the same time. From Buddy Holly, Hank Marvin, Buddy Guy, Rory Gallagher, David Gilmour, Ritchie Blackmore, Jeff Beck, Eric Clapton, Eric Johnson… The list is endless. It’s a who’s who of guitarists. But all our favourite guitar players, yielding a Strat or not, would agree, that Hendrix had a big hand in showing the world what the electric guitar was capable of. And a Stratocaster had a huge role to play in that.

From the time that the first Stratocasters rolled off the assembly line, to when Leo Fender departed the company he had helped build, the guitar underwent few changes. Rosewood fretboards were added, and the body changed from ash to alder. But by and large, the design went unchanged. And thus, in his effort to provide a utilitarian tool to guitarists, Fender ended up making one of the most iconic designs of the last century.

Since its inception, many variations on the theme have come up. Many brands make modified versions usually referred to as ‘super-Strat’ guitars, and there’s also the controversial Paul Reed Smith Sliver Sky model. One could also argue, that any double-cutaway guitar with a knife-edge vibrato unit and 6-in-line tuners is, in some way, tipping its hat to Mr Fender.

By 1965, Leo Fender sold off the company that was named after him, and had forever altered the face of popular music. He never stopped innovating, and went on to make some amazing instruments that were marketed under the Music Man and G & L brands. But the Stratocaster will always be revered as his greatest creation. In fact, at the time of writing, the most expensive electric solidbody guitar ever to be sold at auction is a Black Stratocaster, famously used by David Gilmour of Pink Floyd.

Fender itself has been updating the model regularly, and the latest American Professional II guitars are a case in point. But at its core, the Stratocaster is the same instrument that Leo Fender helped design back in 1954. Currently, the company offers Stratocasters in several different guises and budgets. The choices are almost limitless. You can opt for a vintage-style Stratocaster, or pay top money for Custom Shop or Artist Series instruments, get a more modern version, or buy a nice affordable Squier model.

Are you a committed Strat player? What’s kept you faithful over the years? Let us know in the comments below.

15 responses to “The Stratocaster and the Genius of Leo Fender: A Short History”

24 Jul · Small things to take into consideration Both gearbox’s and bone do are own by Thomann. Also, as a general rule cheap instrument reviews are to be taken with a grain of salt: the main problem of ...

24 Jul · Nice information for the new frank Bello signature guitars¡! Got mine!!

24 Jul · You should have also mentioned that this is the long overdue rebrand/refresh of the 23 year-old MIM Deluxe Series.