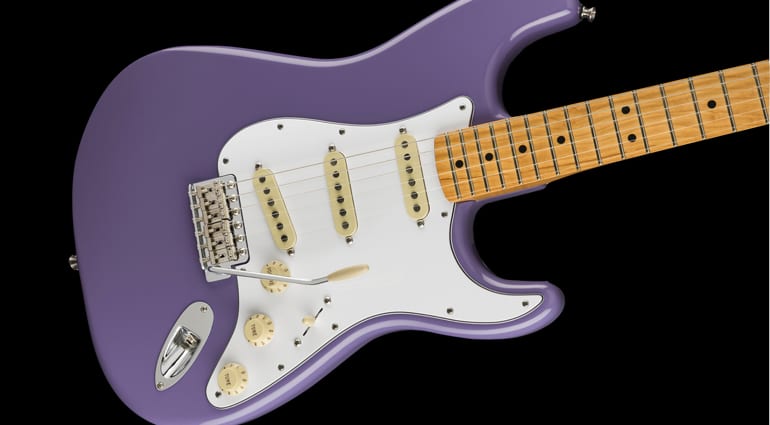 Back at Summer NAMM 2018, Fender announced yet another Jimi Hendrix Stratocaster. Now this latest homage to one of rock’s greatest guitarists is finally being released.

I’m not a fan of Hendrix cash-ins – but at least this one is a guitar, rather than a bottle of vodka or a set of plectrums in a tin. The 2018  Jimi Hendrix Stratocaster is a ’60s style Strat with a reverse headstock and bridge pickup, a signature on the headstock and a ‘Hendrix’ neck plate.

The pickups are Fender’s 65 American Vintage ‘65 single-coils, with a reverse-slanted bridge pickup that some players believe will get you closer to Jimi’s tone. Jimi, of course, strung a right-handed Strat upside down, so the bridge pickup was aligned to the strings this way.

The new Hendrix Strat will be built in Mexico, and should be a decent Stratocaster with an alder body, a maple C-profile neck with a 9.5″ radius and loaded with medium jumbo frets.

The Jimi Hendrix Stratocaster is available in three finishes: Sunburst, Olympic White and a 2018 limited-edition UltraViolet. Price-wise, they are reasonable and I have already seen dealers online discounting the standard RRP, so you may well shave a bit off of the list price. It isn’t as ridiculously overpriced as their Custom Shop version. That gives younger players a chance to pick one up for well under a grand.

If you like purple then the limited edition version in Ultra Violet may be the one for you. I quite like purple guitars, I just wish the shade used here would have been a bit deeper. But buying this guitar is no guarantee that you’ll sound or play like Jimi…