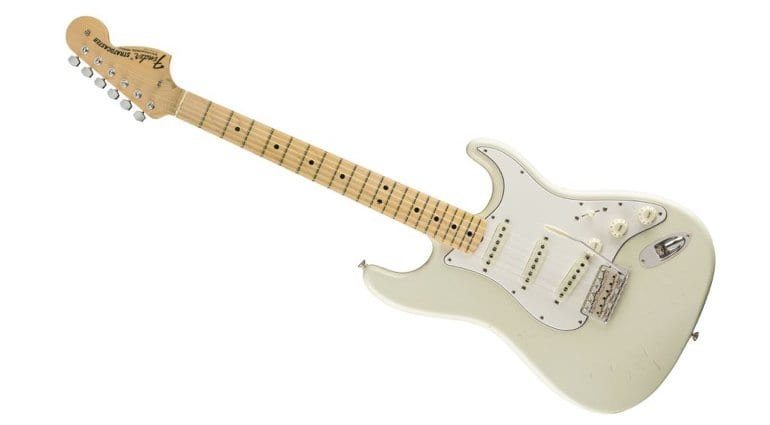 Fender’s Custom Shop don’t miss a trick, do they? As the 50th anniversary of Jimi Hendrix’s appearance at Woodstock rolls around, they have decided to release another ‘Hendrix Strat’ with a production run of 250 instruments. The only problem is that there’s nothing particularly special about this model at all. Except the price tag. And the Hendrix name.

This model is a reproduction of “Izabella”, the guitar Mr James Marshall Hendrix played during his rendition of the Star Spangled Banner at Woodstock in 1969. He purchased it at Manny’s Music in New York. It was a regular 1968 Olympic White Strat with an alder body and two-piece maple neck, with no “skunk stripe” and truss rod adjustment at the heel. The serial number is 240981.

The new model is called the Jimi Hendrix Custom Shop ‘Woodstock’ Strat. It has an alder body in Olympic White with a three-ply parchment pickguard. The neck is flat sawn maple ’60s C-shaped neck with a maple fingerboard loaded with 21 vintage-style frets and nickel-plated steel .010-.046 gauge strings.

So nothing particularly special here. Don’t expect to sound anything like Jimi when you play this guitar. It has the ‘vintage’ specs but it’s a regular guitar in modern day terms and not really special in any way, other than it has the Hendrix name on it.

The Fender Custom Shop Limited Edition Jimi Hendrix Stratocaster will come with a deluxe hardshell case, custom strap, custom headband, coiled cable, commemorative booklet and a Certificate of Authenticity. Call me cynical, but a quick back-of-the-envelope calculation goes like this: 250 x £6549 = Just over £1.5 million. Given the specs, surely most of that is profit?

Personally, I find these Hendrix ‘cash-in’ guitars really distasteful. It just seems to be all about the money and finding gullible people with lots of cash to spend.