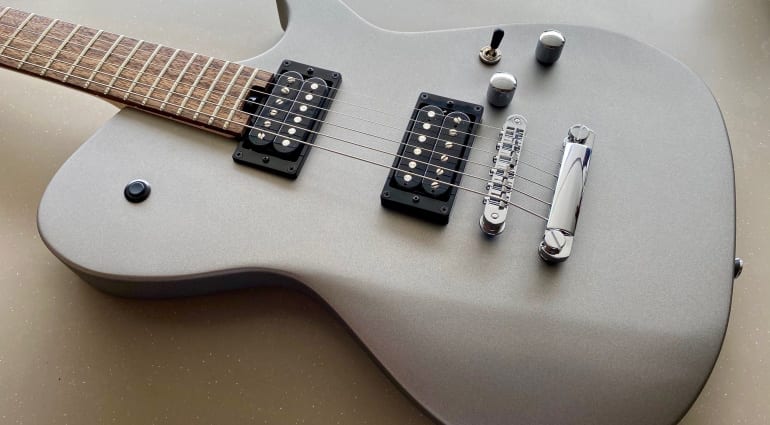 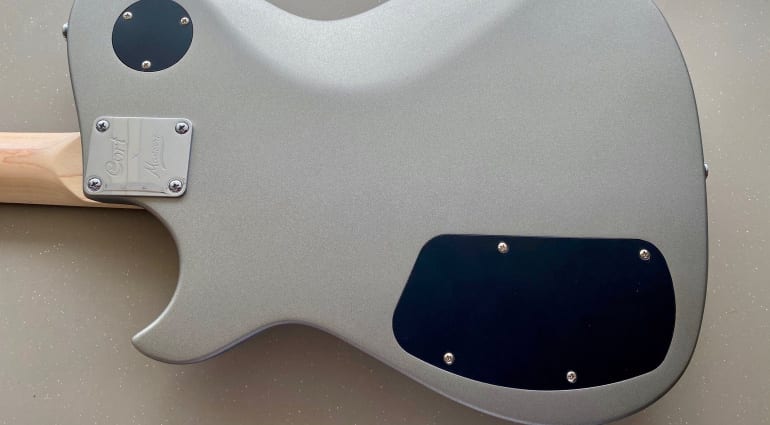 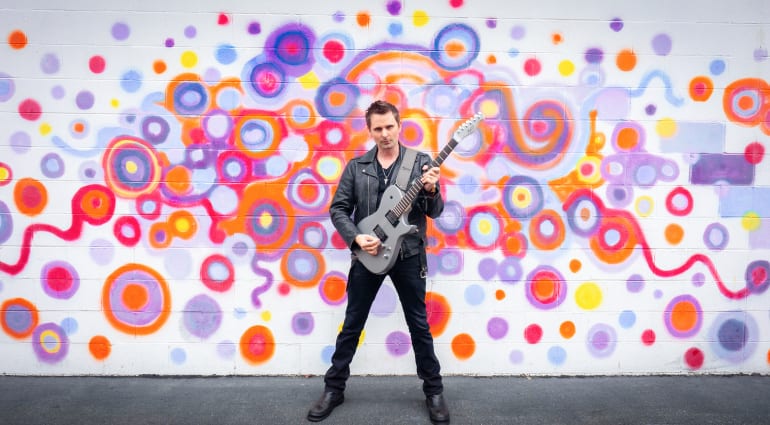 At NAMM 2020, Manson and Cort announced a new model developed with Manson Guitars founder Hugh Manson and Muse frontman Matt Bellamy. The Manson MBM-1 Meta was billed as a new collaboration between Mssrs Bellamy and Manson, once again being produced by Korean manufacturer Cort Guitars. A one-trick alt-rock pony or a versatile creative tool? Time to plug it in and give you my opinion.

As you probably already know, Matt Bellamy of Muse and Manson Guitar Works have been cooperating on various guitar designs for many years. We asked the guys at Manson to send over one of their new Starlight Silver MBM-1 from the new Meta series. And this guitar took me a little by surprise – and gave back a lot more than I was expecting.

Opening it up, the first thing that struck me was the finish, which was beautifully applied. I could find no faults anywhere across the guitar body. It has a lovely matte feel and is iridescent with a subtle warm sparkle that hasn’t been done justice on any photo I’ve seen. It looks stunning. There’s a lovely DMC DeLorean vibe to it, with a utilitarian and robust look that gives you the kind of futuristic feel you’d associate with Matt Bellamy’s music. If silver’s not your thing, this model is available in Satin Black, too.

First, the basic specs:  The MBM-1 has a lightweight basswood body with a bolt on hard maple 25.5″ scale length neck loaded with an Indian Laurel fretboard. Personally, I love basswood on solid finish guitars, as I find it tonally neutral and consistent. For me this was a huge plus, as it handles cleans and gain tones equally well. Sure, it isn’t the prettiest tone wood, but if you are going for a solid colour finish, then it is one of my three favourites, along with alder and ash. This guitar came in at just over 7lbs which is quite light. It sits well on a strap, too.

The maple neck has a Soft V profile and a compound radius 12-16″ Indian Laurel fretboard. I measured it as 43 mm wide at the nut and 50 mm at the twelfth fret, with a depth of 21 mm at the first fret and 23 mm at the twelfth fret. The profile is not as flat as a modern Charvel or Ibanez style neck and the playing experience was very comfortable.

The frets: the fretboard has 22 medium jumbo frets. No sharp fret ends here; they were all super smooth. Partnered with the rounded off fretboard edges, this made the neck feel fast and already played in. The flat compound radius means you can shred on this guitar till doomsday. I found no dead spots and chords rang out true. The back of the neck isn’t sticky and the Soft V let me play for ages. It also sits nicely in the palm of your hand for playing blues licks with your thumb hooked over the top fretting low notes, which makes it a good all rounder for me.

One thing of note: following Matt Bellamy’s personal preference, there aren’t any fretboard markers. I know some players prefer markers on the fretboard, so it is worth mentioning. But the side dots are clearly marked and did the job.

The MBM-1 comes factory fitted with a pair of Manson Humbuckers wired via a three-way toggle switch located between the volume and tone control. A kill switch is located on the top horn. The Manson Humbuckers are a pair of Alnico V magnets with outputs roughly at  15.5 k bridge and 14.0 k neck.

I opened up the well-shielded control cavities and had a poke around. The wiring inside is neat and the solder joints were all fresh and shiny.The Alpha 500K pots are super smooth. I like the volume control position, as I use my pinky for volume swells and so the pot fell perfectly under my hand. The pots are smooth but firm, so you will not accidentally go silent mid Townsend windmill strum with these. The three-way toggle switch is sealed and worked fine with no crackles. It’s well placed for quick pickup selection and feels robust. The kill switch on the upper horn is fun to play with, but i s well-positioned to avoid accidental triggering. 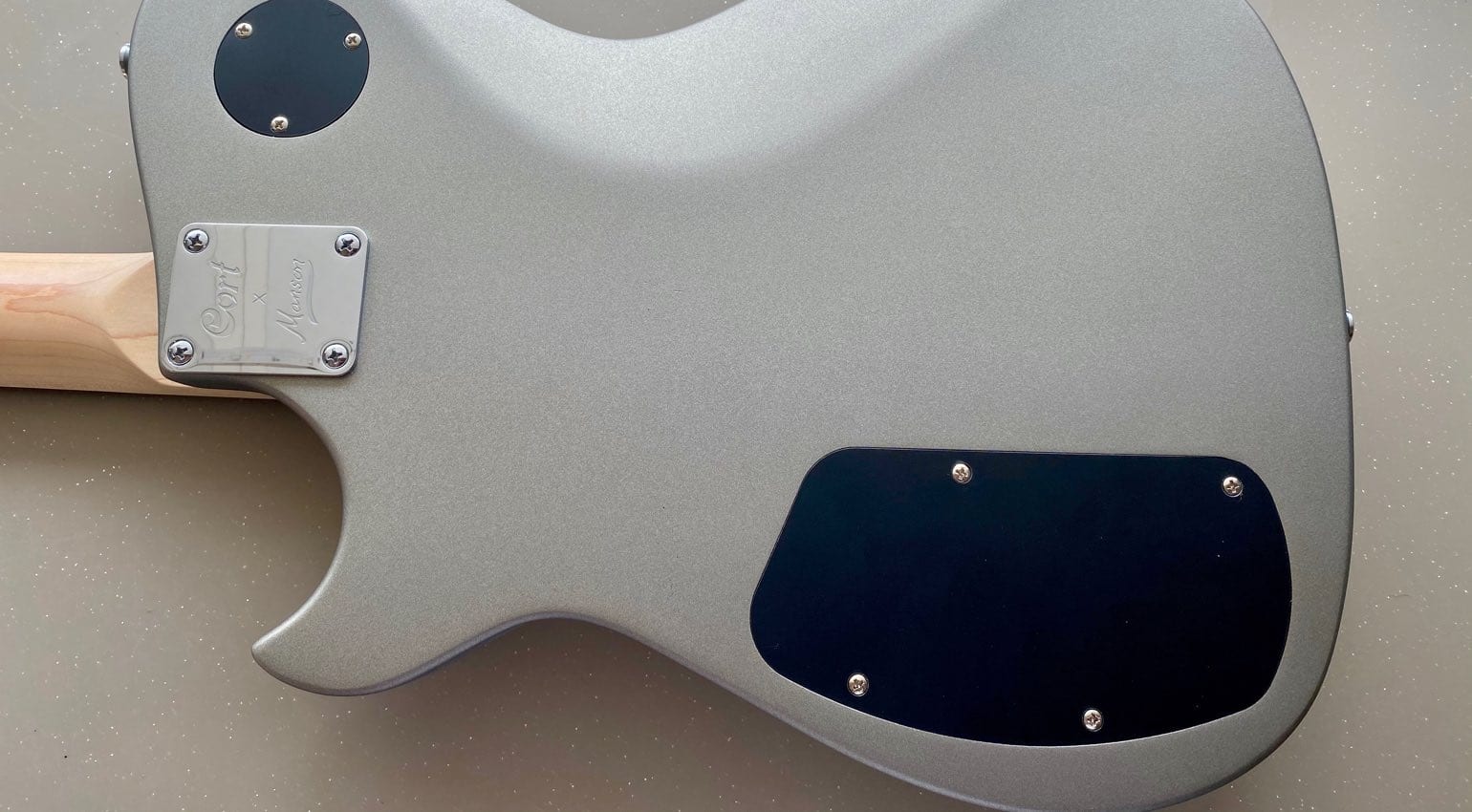 The hardware on this guitar is super simple and works with zero fuss. I like the Cort staggered locking tuners as they obviate the need for any string trees. They combine with a well-cut synthetic nut for solid tuning. The bridge is a tried and tested tune-o-matic with tailpiece, which held true even when I dug in hard. The intonation was spot on. I’m a sucker for thumb wheel truss rod adjusters and so it was pleasing to see one used here.

One huge bonus for me was the large main control cavity, as there is plenty of room in there for modifications, like an internal fuzz circuit or sustainer system. One small gripe: the chrome silver control knobs are every so slightly loose on the Alpha pot shafts, making them easy to pull off. That’s an easy fix, though. All in all this is a very practical guitar, with well-chosen, solid hardware that should last.

The sound and the feel

Lots of smaller things add up on this guitar to make a good overall impression. The neck profile is very playable, especially when paired with the compound radius board and smooth fretwork. The upper fret access is very good and I found myself being able to fret the 22nd fret with no issues thanks to the deep cutaway. The belly cut is pleasant and works well with the chambered front where your picking arm usually sits. The guitar rests nicely against your body with no sharp edges.

Overall, the tone was a lot warmer than I was expecting. This guitar handles cleans and overdrive with ease. The Alnico 5 humbuckers are articulate and clean up well if you turn down the volume knob. I’ve played it through various amps now, including my Friedman Pink Taco, which it suited beautifully, as I could control the amp gain with the guitar volume. I even put it through my little old Pignose amp and Yamaha THR10C and it sounded great.

Across the board, the fit and finish of this guitar was impeccable, with everything from the control cavity routes to the neck joint absolutely spot on. No dodgy routing issues or finish hiccups anywhere, everything was tight and lined up perfectly. And to be brutally honest this is what floored me. At this price point, I was expecting small imperfections. But this guitar has none. Opening it up to look inside, everything I found reaffirmed the impression of a well-made instrument.

While fans of Muse and alt rock generally might feel more directly addressed with this guitar, its versatility has a wider appeal. Its real strengths lie in its note definition, its full, clear tone and articulate, piano-like cleans. It’s a package that’s well-suited to many types of music, making this a great creative tool for adventurous guitarists. And at GBP 579 or EUR 633, you’re getting a lot of guitar for the money.