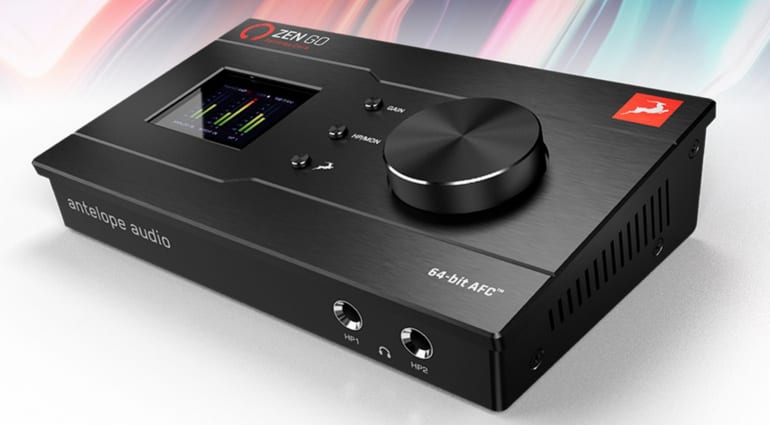 The USD 499 price range is a clear choice between more I/O or DSP power. While Focusrite and PreSonus take the cake for channel counts, UA and Antelope cram high-end technology at cost. The answer to who offers better value for money is entirely subjective and decided by your needs.

Antelope’s move into that market segment condenses the Zen Tour Synergy Core to a compact 4 x 8 audio interface that costs less than a third of its price. But the Zen Go Synergy Core is more about appropriate reimagining instead of corner-cutting. Where the Zen Tour packs the guts of a professional rackmount interface into a desktop unit, the Zen Go is meant to go into project studios and backpacks while built to the same quality standards.

Measuring 198 x 117 x 57x5mm at a weight of 700g, the interface is equipped with dual headphone outputs, dual mic/line/Hi-Z combo-XLR connectors, a single monitor output spread between a pair of 1/4-inch jacks and a pair of RCA connectors, and S/PDIF.

The presence of dual USB-C ports is a bout of meaningful Antelope innovation. One lets you connect the interface to a computer and work from USB bus power. You can also connect to a smartphone or tablet (the interface is class-compliant) and use the secondary part to power the Zen Go from USB accessories like power banks. The third option is to connect to a mobile device and simultaneously charge it while powering the interface from the secondary USB.

The top panel exchanges the Zen Tour Synergy Core touchscreen for a 1.77-inch IPS display that’s not interactive. It provides volume/gain metering and menu navigation. The big and snappy jog control with three function buttons layout has been preserved.

Specs-wise, the Zen Go Synergy Core seems to be genuine Antelope in and out. It brings aboard the discrete transistor preamps that the manufacturer developed for its Discrete interfaces and refined in later offerings. The 64-bit Acoustically Focused Clocking algorithm is also in. Pair that with decent converters handling up to 127dB of dynamic range, and sound quality is a guaranteed non-issue. The Synergy Core DSP + FPGA implementation is not detailed, but Antelope claims it’s running twice as many effects per channel compared to the Apollo Solo. There are 37 effects and gear emulations included, with more available from the Antelope website – the catalog is varied and the prices are surprisingly sane.

At USD 499, the price of admission for the Antelope experience has never been lower. The manufacturer knows there’s more to a great interface than having every I/O in the world and confidently enters the price realm of users looking for a second audio box to replace their entry-level unit. It also throws smartphone and tablet recordists a lifeline with a high-grade interface that’s able to power their devices while in use.

The Zen Go Synergy Core will start shipping in the second half of February.