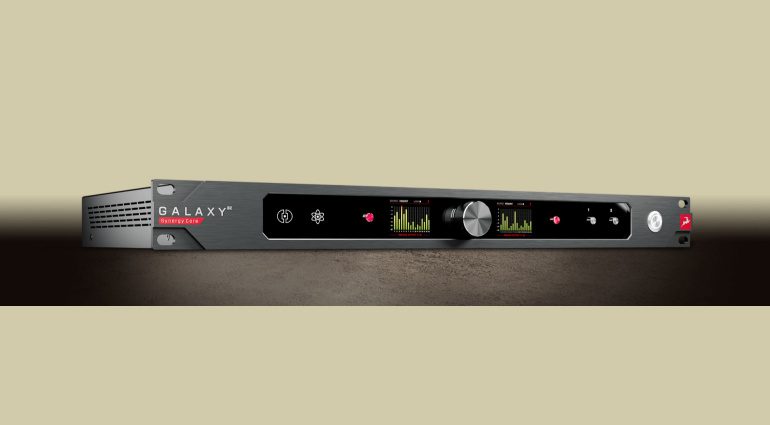 A year and a half ago, Antelope Audio presented its flagship AD/DA converter – the Galaxy 64 Synergy Core. It’s quite the engineering feat – you can read more about it here. Downsizing the hyper-everything box for lesser workloads and tighter budgets seemed like a logical, inevitable move – the only question was when.

Between its compact Zen Go / Q audio interfaces and the Axino USB modeling mic, Antelope somehow managed to incarnate a 32-channel Galaxy. The Galaxy 32 Synergy Core is not formally announced yet, but its product page is up at the manufacturer’s website. This usually means that the unit is near or in production.

UPDATE (25.08.2021): Antelope Audio formally announced the Galaxy 32 Synergy Core today. The device will be shipping in Q2 2021 at a projected price of USD / EUR 4895. It’s up for pre-order from Antelope Audio and its dealers, such as Thomann (affiliate link) where the price is EUR 4800.

The Zen Go and Zen Q interfaces demonstrated Antelope’s proficiency in scaling its technology for different needs and budgets. Neither the tiny Zen Go, nor the girthier Zen Q seem like jokes next to the very impressive Zen Tour Synergy Core. That’s because they are genuine re-imaginings instead of mere hack-jobs. Judging by the presentation, the same applies for the Galaxy 32 Synergy Core.

While faithful to its 64-channel relative, the sleek 1U box with dual color screens is also a likely reboot of Antelope’s groundbreaking Orion 32 line. It completely covers the functionality of both the Orion 32+ and Orion 32 HD converters, in one unit of the same size. Only the USB connection is missing, as the hardware is exclusively Thunderbolt 3.

Compared to the Galaxy 64, the Galaxy 32 is more than half the connectivity and exactly half the DSP power (up to 128 effects instances), with mostly the same features. We are talking one Thunderbolt 3 port, 32 analog inputs (with switchable AC/DC coupling) and 32 DC-coupled analog outputs on D-SUB; dual Dante ports, dual HDX ports (up to 64 I/O channels in Pro Tools), MADI (64 channels), ADAT (8 channels), and S/PDIF. As we can’t have an Antelope device (or a competent converter, for that matter) without flexible clocking options, you get one Word Clock / Loop Sync input, dual Word Clock / Loop Sync outs, and one Antelope 10M/MX atomic clock input. The Galaxy 32 is clocked internally by the manufacturer’s 64-bit AFC (Acoustically Focused Clocking) algorithm.

Whereas the Galaxy 64 can be operated via touchscreen, the Galaxy 32 implements dual color displays and clicky buttons. While the bulk of the action happens in the Control Panel application, the front panel controls are not an after-thought. Once the session is configured on the computer, they let you operate the unit standalone and monitor signal levels.

The Galaxy 32 includes 37 low-latency Synergy Core effects out of the box. The list is heavy on vintage EQs, preamps, and compressors – you’d be pleasantly surprised, if not overwhelmed by the choice. Still, there are plenty more at the Antelope website if you have coin to spare.

Orders are open now; the price at our affiliate partner Thomann is €4,799. That’s less than what you’d expect, given all the features.