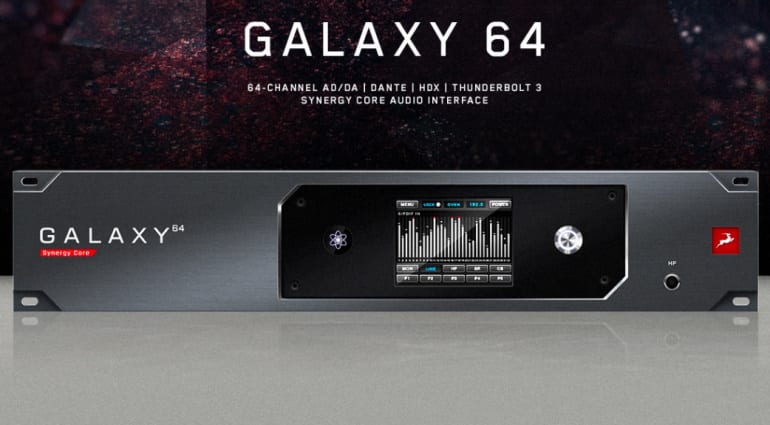 Apparently, Antelope had a second bunny in the NAMM hat. The Zen Tour Synergy Core managed to escape on its own a little early, but this one stayed a secret until the Antelope reps brought it to the show floor. The Galaxy 64 is shaping up to be a landmark product for the European manufacturer. Remarkably, it’s the first-in-world 64-channel AD/DA converter and also Antelope’s first Dante device. Let’s see what else is there to this busy 2U unit…

This is another Synergy Core device, the most powerful one by far. Antelope stacked a whopping 12 ARM DSP chips in it, keeping company of dual FPGA chips. That ought to be enough to service 64 channel strips worth of effects and signal flow, keeping calculations in-the-box instead of hammering your CPU. Since Antelope is only teasing the Galaxy 64 at NAMM, we will have to wait a while for details. But this company likes to move fast, so I’m sure it won’t be too long of a wait.

Since the Galaxy 64 is a converter, first and foremost, there are no preamps in it. Analog I/O is spread over eight DB25 connectors, ready to meet your desk and outboard, as well as L/R monitor outputs. Recent Antelope devices hover at around 130dB of dynamic range on the monitor outputs and proudly feature the company’s proprietary clocking technology. So it’s a safe bet that the Galaxy 64 is no slouch when it comes to conversion quality. Sample rates are capped at 24-bit, 192kHz.

Digital I/O is where the party goes positively nuts. Stereo AES, MADI and S/PDIF have appeared in Antelope flagships before, but Dante (primary/secondary) is a first. It’s an important addition to a converter as powerful as this one, enabling its installation at network-based large events, production facilities and recording studios. And then there are the four HDX ports. Is this strictly for redundancy, or is the Galaxy 64 indeed piping a full 128 audio channels in and out of Pro Tools Ultimate? Boy, it looks like the old AVID MTRX may be handing some belts over to this hot-rodded challenger…

The available I/O is complete by a pair of Thunderbolt 3 ports for computer connection and daisy-chaining units, alongside Word Clock and Loop Sync I/O on BNC connectors. No ADAT, but since Dante and Pro Tools are the main digital I/O focus here, it doesn’t seem like a critical omission.

The Galaxy 64 is controlled via a touchscreen and software Control Panel combination, not unlike the freshly debuted Zen Tour Synergy Core. This is a serious piece of kit and a hearty reminder that Antelope was the first to come up with a 32-channel AD/DA converter back in the day. History tends to repeat itself, after all.

Antelope says we’ll be seeing more of the Galaxy 64 after NAMM. Seizing 2020 like this so early on, only CEO Igor Levin knows what surprises the company has in store for the rest of the year. 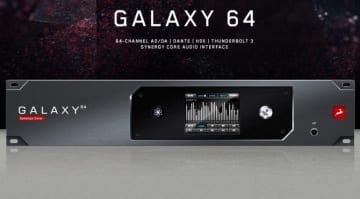 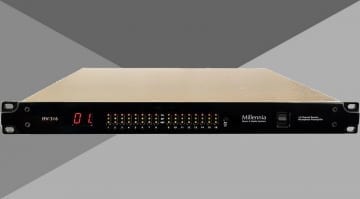