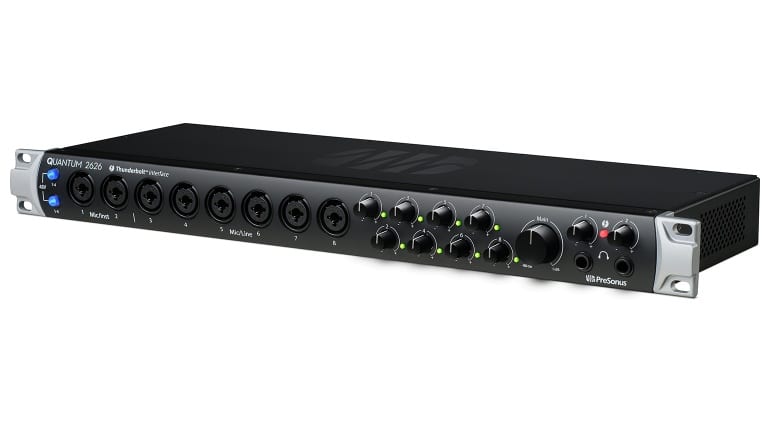 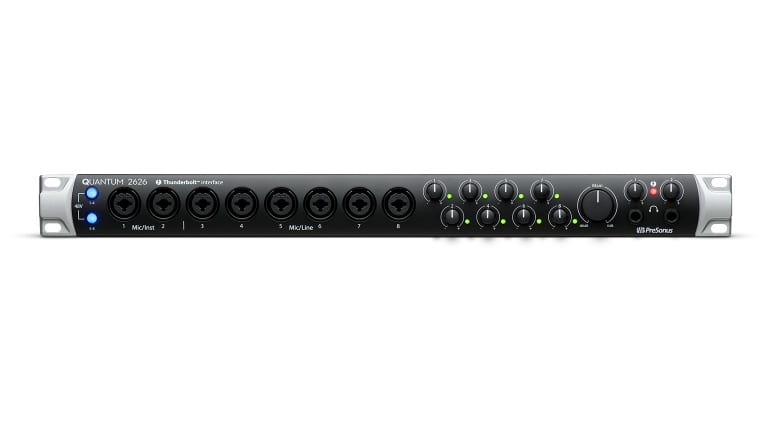 PreSonus has announced the Quantum 2626 Thunderbolt 3 audio interface. With 26 inputs and outputs, eight microphone preamps and two instrument inputs, the PreSonus Quantum 2626 offers plenty of connectivity at a moderate price.

Many were expecting PreSonus to present an updated Quantum Thunderbolt audio interface at NAMM 2020, and they were right. The new Quantum 2626 marks the arrival of Thunderbolt 3 connectivity to the line-up, which is excellent news.

As the name suggests, the interface features a total of 26 inputs and 26 outputs. There are eight analog inputs on XLR/TRS combo jacks on the front panel. Two of these operate as mic/instrument inputs, while the other six are mic/line inputs. All are equipped with PreSonus XMAX preamps and hardware gain controls. Phantom power can be activated for inputs 1-4 and 5-8 separately. The front panel also has two independent headphone outputs, and a main volume knob.

At the back, there are eight DC-coupled, balanced analog outputs on TRS jacks, and an additional stereo main output. The Quantum 2626 also offers two preamp outputs and line returns each, for adding in additional outboard processing. On the digital side of things, you get ADAT Optical/Dual SMUX inputs and outputs for an additional 16×16 channels at 44.1 or 48 kHz, or 8×8 channels at 88.2 or 96 kHz. The Quantum 2626 also has stereo S/PDIF in/out, MIDI in/out and Wordclock in/out with low-jitter clocking.

The converters operate at up to 192 kHz / 24 bit, with a dynamic range of 115 dB. According to PreSonus, the Thunderbolt 3 driver was written from the ground up. The company claims that it delivers a round-trip latency of less than 1 ms, which is very fast indeed.

Like all PreSonus interfaces, the Quantum 2626 comes with a software package. In this case, it includes Studio One Artist and the Studio Magic plug-in bundle.

The PreSonus Quantum 2626 interface is now available. It retails for USD 599.95.