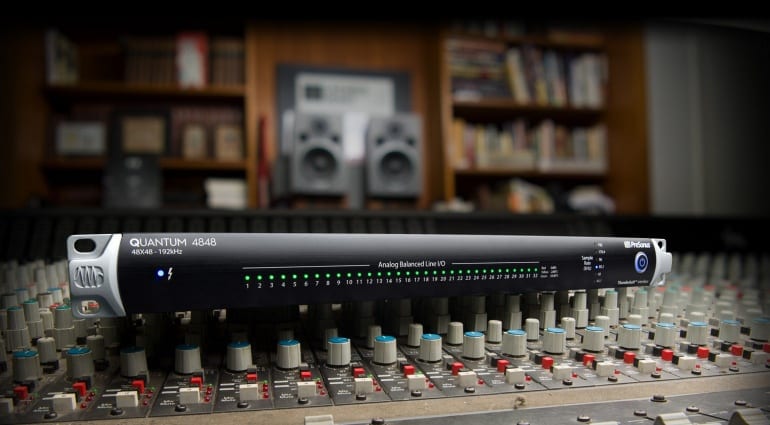 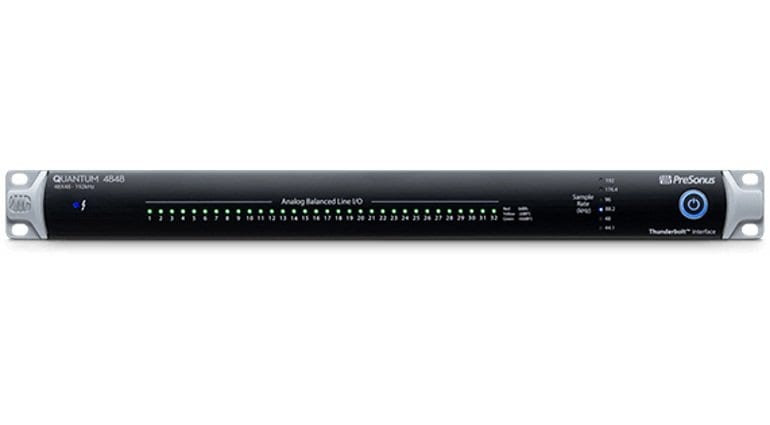 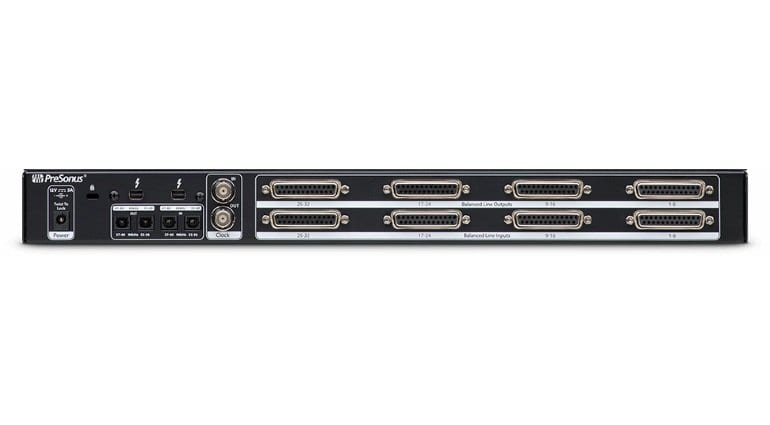 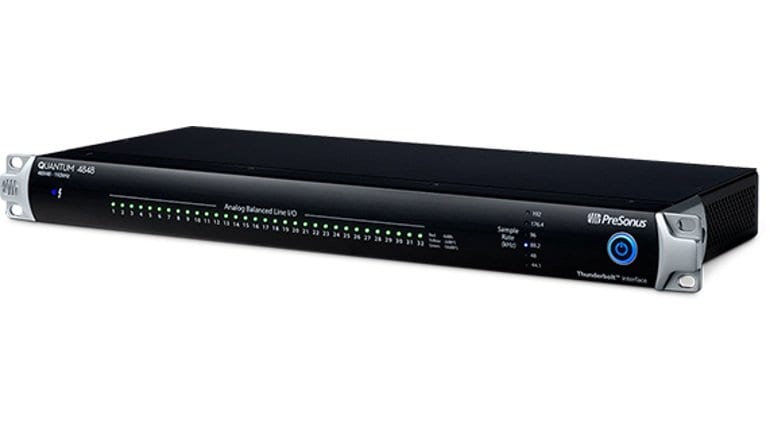 We now know what PreSonus did this summer: it announced a new audio interface – the Quantum 4848. Targeting professionals with a mixed analog/digital setup, the 4848 is a 48in/48out Thunderbolt 2 interface slash AD/DA converter armed with 32 ins and outs over DB-25 and an additional 16 channels of ADAT optical I/O for a total of 48 audio channels at 24-bit, 192kHz sample rate.

The converters handle 120dB of dynamic range, which isn’t the industry’s highest, but it will more than suffice. And being a Thunderbolt device, the 4848 is stackable – up to four of these can be chained together for a monster 192in/192out system. You can also run it together with PreSonus’ original Quantum and Quantum 2 interfaces to take advantage of their XMAX mic and instrument preamps.

A novel feature is the software integration with PreSonus’ DAW, Studio One Professional, and its Pipeline XT technology. The basic idea is that any piece of outboard gear can be “inserted” and managed into your session like a plug-in, with automatic latency compensation. This way, you can use all your favourite gear and plug-ins simultaneously with a seamless workflow, says PreSonus. Additionally, the manufacturer implemented flexible dropout protection to reduce risk of audio dropouts in large session, even at small buffer settings.

Like all Quantum interfaces, the 4848 is designed for near-zero latency recording and mixing, accomplished by virtue of a lean Thunderbolt driver and hardware architecture. Another interesting feature is Channel Profiles. It’s designed to ease the 4848’s integration with DAWs which limit you to a certain number of inputs and outputs when using a third-party audio interface with them. By setting the Quantum to use either 32 analog inputs and 16 ADAT channels, 24 analog inputs/8 ADAT channels, or 16 analog inputs/16 channels ADAT, you can make efficient use of the limited I/O available without complex routing and configuration trickery. Pretty clever on PreSonus’ side!

Finally, as an added bit of value, the Quantum 4848 includes PreSonus’ most up-to-date Studio Magic plug-in suite with software by the likes of Arturia, Brainworx, SPL, Lexicon, Output, Klanghelm, maag audio, and others. Here’s the obligatory slick promotional vid:

All in all, this is a well-thought out addition to the Quantum line-up which brings PreSonus’ expertise in low-latency Thunderbolt interfaces to the modern digital/analog era. We also like the design of this thing, as it looks very clean and shall we say, expensive? It works as an adjective, but it’s a bit inappropriate, for the Quantum 4848 will be priced around an affordable USD 1500. It’s actually a pretty crazy price considering all the I/O flexibility you get along with more than decent AD/DA conversion. PreSonus has managed to impress us yet again! The release date isn’t known at this point, but it’s bound to be soon. You might want to check with your local PreSonus dealer for estimated availability.

Correction: In a previous version of this article, we stated that the Quantum 4848 uses Thunderbolt 3. In fact it’s a Thunderbolt 2 device.

That interface is a great option for lots of outboard gear like preamps or dynamic processors. It’s a Thunderbolt 2 interface but it doesn’t matter, it’s enough bandwidth.
A bit sad is that they have just one LED on the front for input or output. Why not at least 2 rows for in and outs or better 2x 2 rows LEDs for normal and clip level.

Yes, it’s TB2 not TB3 – the article has been amended to reflect that. Thanks!