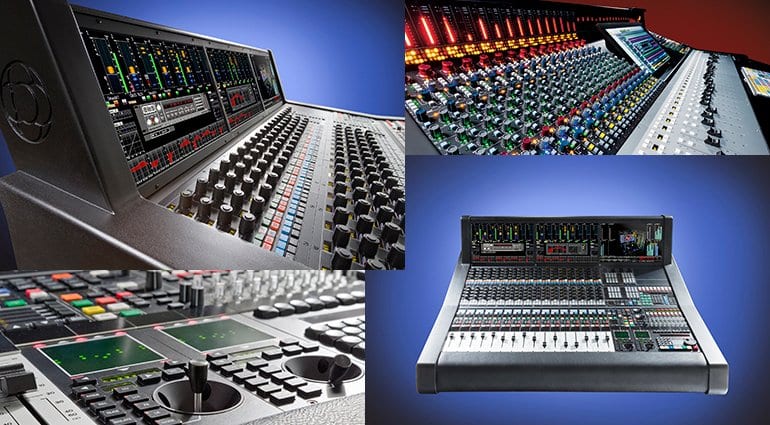 Being such an established company producing some of the very best in analogue audio equipment, new products from AMS Neve are always big news. Not only that, but the reasurch and development that goes into any of their products is extensive, as they design products for everyday studio use that last a lifetime. At this year’s Musikmesse, AMS Neve have a product debut and 2 significant updates for existing hardware.

First up is a new console! They are debuting their new DFC3D digital console, which follows their DFC series. These are primarily digital consoles offering a scalable solution for the post production and motion picture market. This latest incarnation adds further integrated DSP processing of a “Sub-harmonic Synthesizer, Multi-Band Compressor, and the return of the legendary RMX-16 Reverb”. It also promises to offer the “most efficient Dolby Atmos mixing experience” with true 3D panning.

They have also announced an update for their Genesys and Genesys Black consoles with a new feature called ‘Active Faders’. Although they are already equipped with Neve’s Encore automation, this new method builds upon these consoles DAW control. Now users can draw in and record automation directly from their DAW to control the analogue faders and mutes. This is very exciting, but I’m a little surprised how long it’s taken to come out having spoken about this with them nearly 2 years ago. At least it shows they’ve probably put a lot of effort into implementing the tech, something we all forget how involved even the simplest ideas can be to execute.

Lastly, but possibly the most significant for Gearnews fans, is a new digital I/O option card for their 1073DPX dual mono mic pre-amp and EQ rack unit. The new digital I/O option will add AES and Firewire interfaces with their high-end AD/DA converters. In Firewire mode, not only it can provide a direct connection with your DAW, but several 1073DPX can be daisy-chained together. Ultimately, this could be used as your specialist high-end audio interface with it’s two mono line outputs, as well as the dual mono inputs.