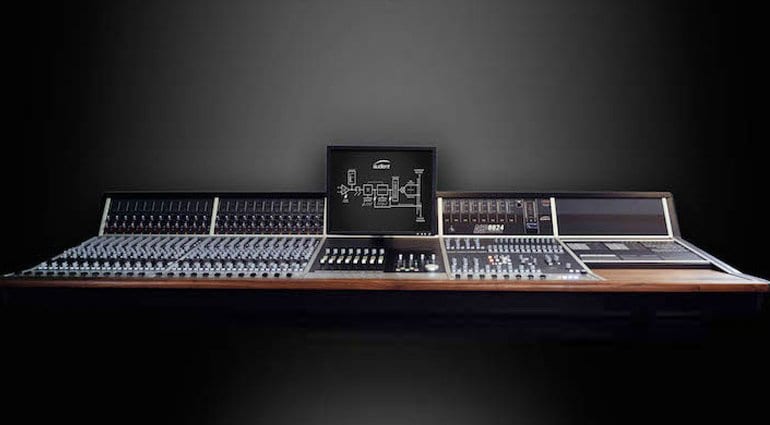 Audient have an upcoming 20th birthday, which doesn’t feel old enough as the main designer at the firm, David Waterman, has been building consoles since the 70’s. He started out at Soundcraft with co-worker Gareth Davies, after which they went on to co-found DDA in the 80’s and 90’s. To mark this special occasion and the huge success of their flagship console, the ASP8024, they are showing a new Heritage Edition at Musikmesse this week.

I have used an ASP8024 many times, which I commonly find a popular choice at training and educational facilities. It is known for offering a traditional large-format style approach of analogue in-line recording for the modern studio. Presented well and built to a high standard, the price of these desks is considerably less than the alternatives. This doesn’t necessarily mean the sound quality is any less and I’ve often been surprised at the results.

This new Heritage Edition is said to be a further development with updates and improvements ‘under the hood’. New features include their new variable mix bus technology RETRO IRON. “Technical Director Tom Waterman explains, “By utilising an all-discrete and warm sounding output amplifier with Carnhill output transformers, RETRO IRON adds punch and ‘vibe’ to the consoles’ mix output.”” This will be a feature only inherent to the Heritage Edition.

Other new features include improved electronics for smoother make-up gain by the VCA mix bus compressor, with a new HPF in the compressors side chain. The main monitor volume control is a new robust design for everyday use, a quieter power supply, added foot switches for latching talkback and an improved headphone amplifier should all add up to more refined desk.

Recommended retail price is said to be around 17,100 GBP for 24 channels, with shipping starting very soon. This is sure to be a popular product for those studios that can still accommodate such gear.