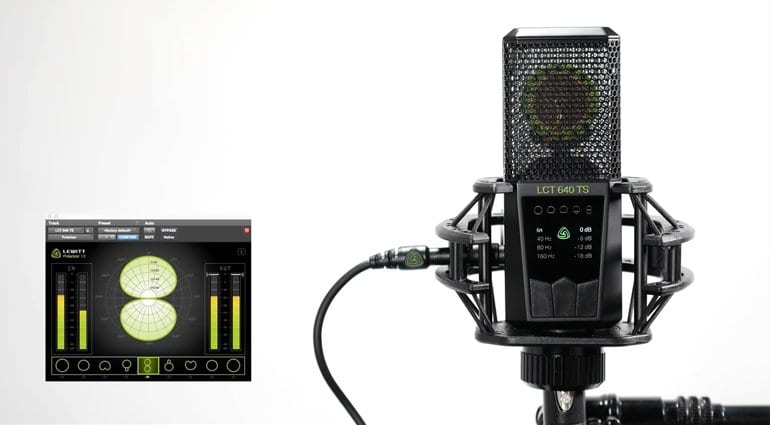 It’s been an exciting time for the evolution of studio microphones. First Slate announced the Virtual Microphone System, which marked the first serious method to audition microphone emulations during tracking or mixing. Secondly, we recently witnessed phenomenal interest building around Townsend Labs‘ 3D mic modelling system. Now we have a hat-trick. This new LCT 640 TS might not roll off the tongue, but its new features have certainly whetted my appetite.

This new microphone is Lewitt’s new large diaphragm studio condenser mic with switchable polar patterns, but with some additional party tricks on offer. Via a second mini XLR connection provided, you can independently record a front and rear capsule onto two channels. From there, a plug-in provides you with the ability to change the polar pattern from omni, cardioid, hyper-cardiod and to figure-of-8, with everything in between. Check out the video below for a unique demonstration! What’s more, because the signal from each side can be recorded into your DAW, this decision can be made at the mixing stage.

There are other benefits from recording each side of the capsule, for example turning the mic through 180 degrees. This means with one mic you would be able to blend some of the direct signal with the reflections from the room – and in phase! Lewitt are also boasting that a mid-side recording technique is possible with a single LCT 640 TS.

These features suggest this mic is extremely flexible and cost effective. I’m really keen to find out how it sounds. Lewitt have put a lot of thought into this microphone. For example, each unit they manufacture will be within a tolerance so close, that any two LCT 640 TS can be used as a matched stereo pair. I’m also really pleased to see the inclusion of a magnetic pop filter. Whilst I remain reserved until I try it to see exactly how effective this pop filter is, it does provide a solution for filming while recording a singer without a massive pop filter in the way.

For more information, detailed specification and operational instructions visit the LCT 640 TS webpage. With a Recommended Retail Price of 889 EUR, I believe this is well priced for the current market. For a mic that promises to be extremely flexible, it is also affordable for most project studios as well as commercial facilities.

Here is an excellent video Lewitt have put together to introduce the LCT 640 TS. As seen on the Lewitt YouTube channel, this well-produced video demonstrates the mic’s unique features.