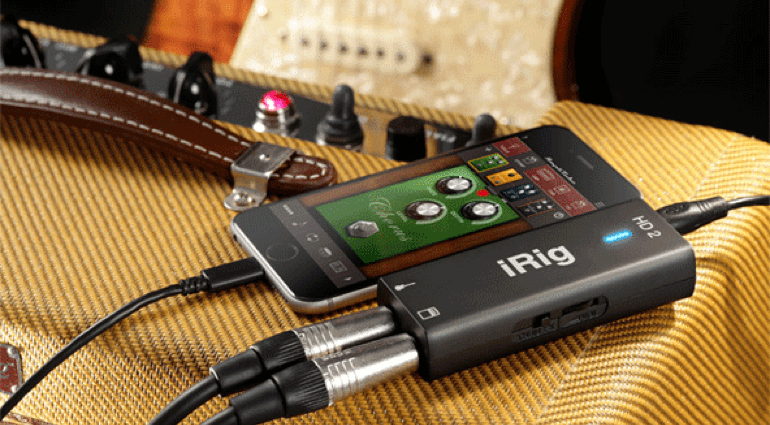 Are you thinking of getting an Apple iPhone 7?

Well IK Multimedia have just launched the new iRig HD 2 interface just in time for your shiny new smartphone. With 24-bit/96kHz audio performance and some great bundled software as well.

The new IK Multimedia iRig HD 2 can record at the popular 24bit 96kHz range using the Lightning port on the bottom of the iPhone 7 and combined with the company’s AmpliTube for iPhone and iPad, you have a pretty powerful recording tool for your smartphone.

The system has grown over the years and now has better functionality (the original iRig was really noisy), plus the company bundle in the Amplitube for iOS and for Mac/PC as well! So a pretty good deal really, as they both fully fledged software packages, that you can also customise and expand by buying extra virtual amps and effects.

I use Amplitube on my Mac quite frequently and it does a good job, I also like being able to try out and buy new amp models via the Custom Shop  feature which is built in. The whole software package, in my opinion, is very good and also importantly easy to use. Once you register your new iRig HD 2 online it makes you eligible for a free download of both software packages. So at a combined price of somewhere in the EUR €170 range, that is a really good deal I believe.

The new higher recording rates should give you a great clean, noiseless signal path and the unit itself is very neat looking. The multi-coloured LED on the front also acts as an input signal level indicator, so you can see if you are overloading the front end or not.

You can also monitor via the built-in headphone socket, so if you were worried about Apple’s removal of the headphone jack, it won’t be an issue anymore when using the iRig HD 2.