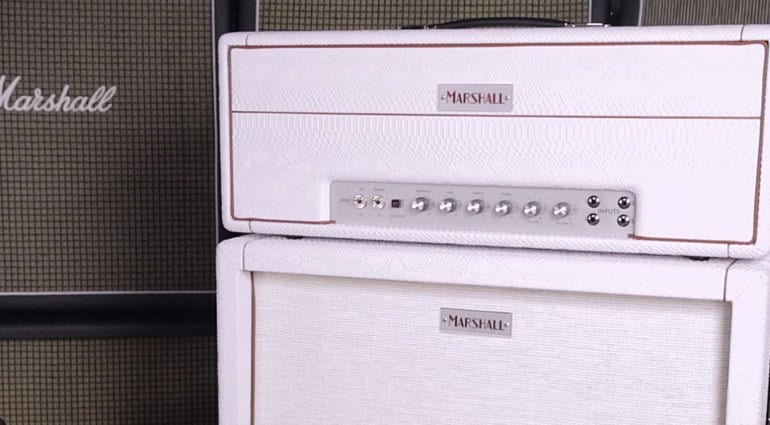 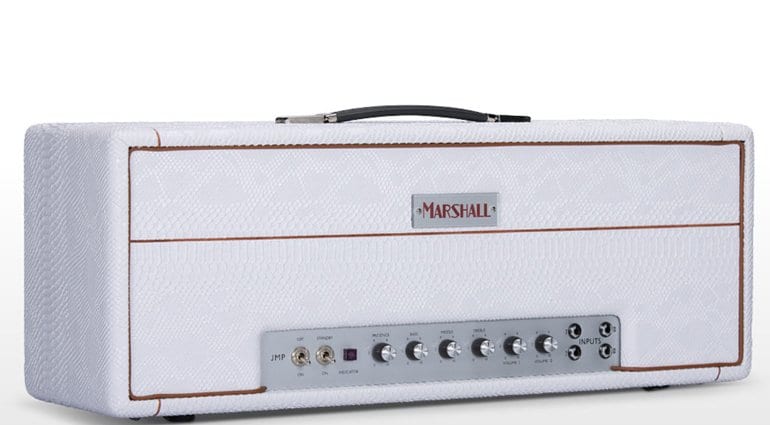 White snakeskin? Obviously, this is a reference to Mr Marsden’s world-famous band, Whitesnake. This 100-Watt all-valve head is a reissue of Bernie’s 1978 amp, one he played with Whitesnake. That amp, in turn, was a rebuild of a 1959 Marshall amp that included some bespoke changes implemented at his request. The 2019 version is a re-issue of that 1978 head that includes the same changes giving it a bit more gain on both channels.

The voicing on this amp emphasises the mid-range somewhat and has been adjusted to provide more control of the frequencies at higher mid-levels. Perfect for blues rock riffing and soloing, then! Plus, Marshall has adjusted the global feedback in the power amp section, the manufacturer says, to allow more expression and punch.

This beast is powered by four EL34 power amp valves in the output section and three ECC83 in the preamp section.

This head has a super-simple control layout consisting of controls for presence, bass, middle, treble and two volume controls. No modern day master volume control or gain controls here, just pure tube amp power! You do get the classic four-input section on the right-hand side, though, so you can jumper those channels for a tonne of extra gain if required.

It’s a monster of an amp head, of course, but if you want classic rock tone, then I believe you cannot go wrong with this amp. I’ve owned a few 100-Watt and 50-Watt Plexi heads over the years and they sound amazing. But be prepared to go deaf if you crank them!

To accompany this head, Marshall offers the matching 1936VBM 2 x 12 140-Watt cab that partners perfectly with this head. The cab is loaded with a pair of Celestion G12 Vintage speakers to give you some classic tones.

Take a listen to Mr Marsden demoing his new signature amp head and matching speaker cab in the official video below. Or head on over to the official Marshall page to read up on the full specification of this new amp head. It’s a limited edition amp, so be prepared to see these sell out relatively quickly when they get officially released.