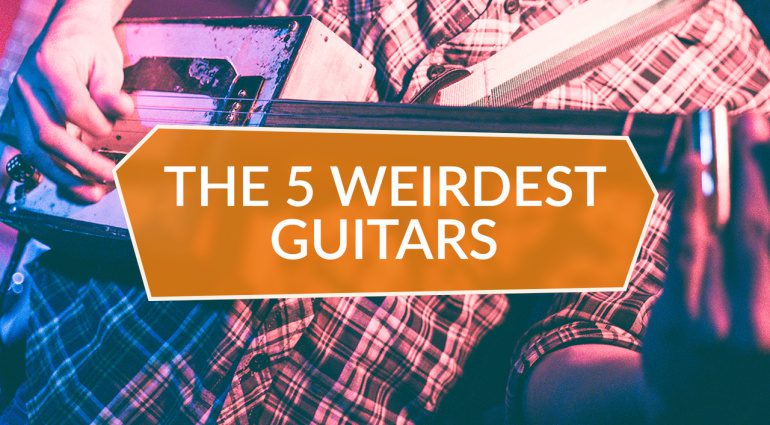 Because of the nature of the instrument, the electric guitar can be fashioned in a number of styles. As long as the fretboard is accessible, the body can pretty much take any form the designer can think of. After being around for more than 70 years now, we’ve seen some pretty crazy shapes. But every now and then, you still come across a guitar that blows all established tradition out of the water.

For the purposes of this article, instead of going through the thousands of unique and inventive designs that can be found on the internet, I decided to limit my choices to guitars that are available for you and I to buy (funds permitting), or have seen the stage. Otherwise, there would be far too many strange and fascinating designs, or modifications, to choose from. Here are some guitar designs that have stuck with me over the years.

Rick Nielsen of Cheap Trick is pretty well-known for his wild guitars. But to me, his 5 neck Hamer is probably the most outrageous. Just because it looks un-useable. How can you go from the top neck to the bottom one?! But no, the guy plays it! The idea came about from a part of the band’s set where Nielsen would have multiple guitars stacked on him, and revolve through them during the performance. Initially, the plan was to have a rotating six neck guitar, but they went with the five neck version instead. 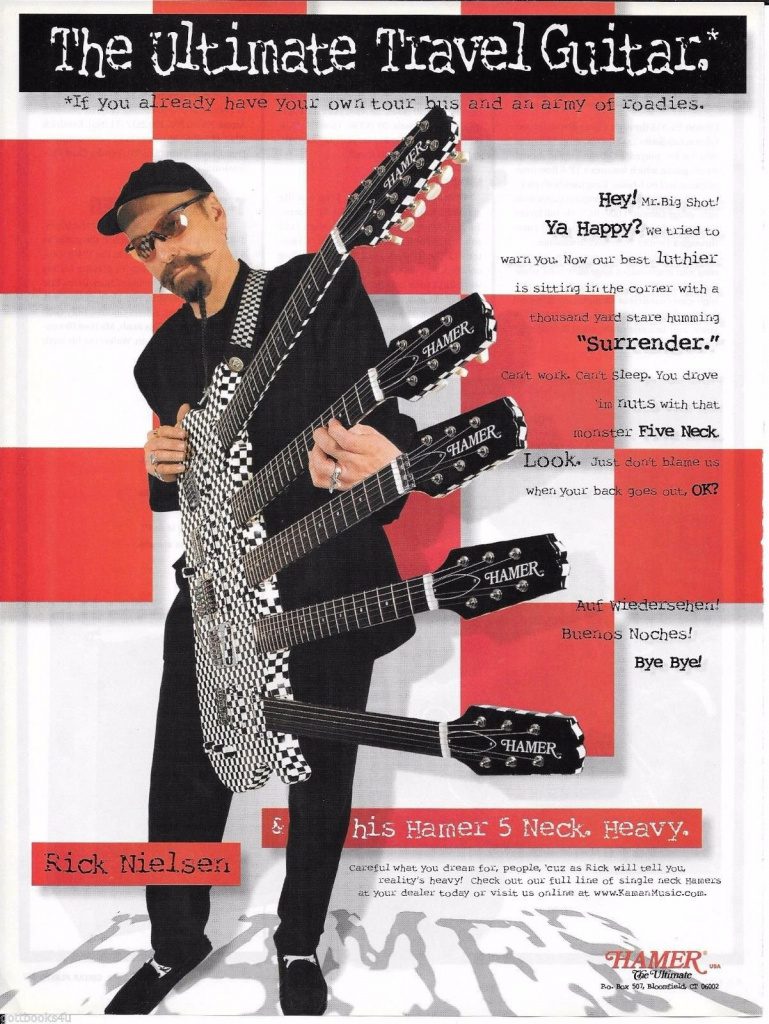 The guitar is basically five double-cutaway Hamer Special bodies with different layouts and necks. The top neck is a 12-string, the one underneath is a fixed bridge six-string with a twin humbucker layout, the next looks the same but with a vibrato bridge. In its first iteration, the fourth guitar from the top looks to be another twin humbucker stoptail, but the chequered version looks to have a Tele-style layout. The last neck is fretless. It comes with Seymour Duncan pickups in all positions and weighs a whopping 48 lbs! I’d love to see the case for that thing. You can check the earlier iteration out in action in the video below.

When they first got exposure to the US, Russian band Gorky Park caught the eye of, among others, Frank Zappa. The band’s debut video Bang is probably the first music video with someone playing a balalaika-shaped guitar (at least that I am aware of). If you didn’t already know, the balalaika is a Russian stringed instrument that traditionally comes with three strings and has a fretted neck, similar to a guitar’s. It has a hollow body with a very distinct triangle shape. 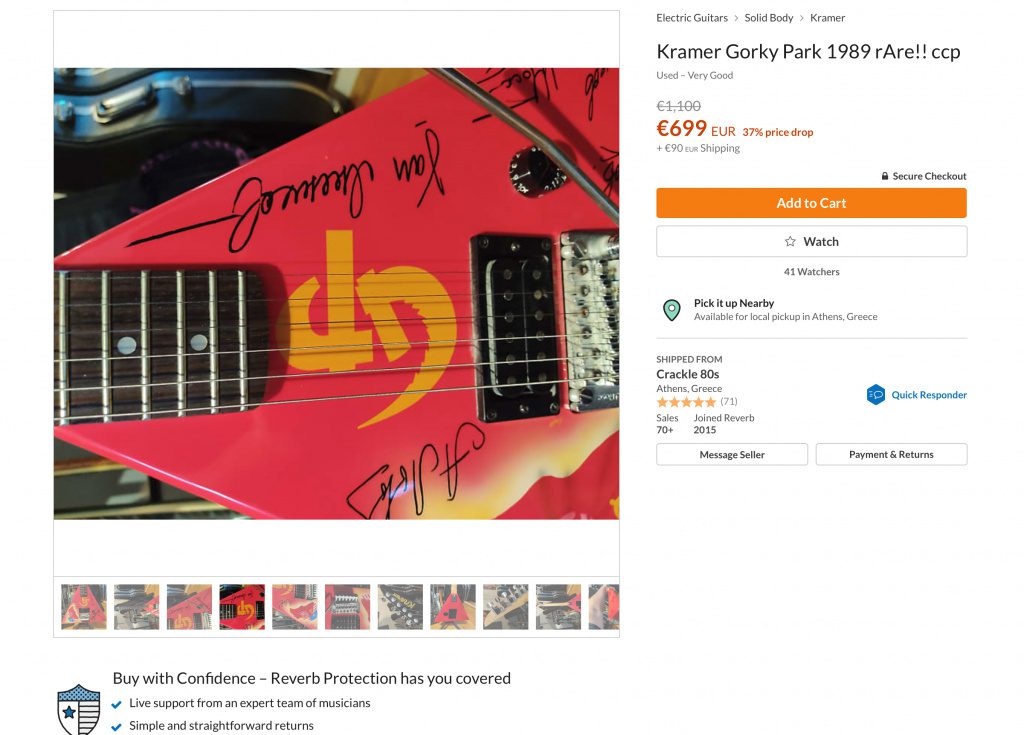 This particular Kramer model dates back to 1989, and was produced in Korea just before the fall of the Berlin Wall. It’s a single bridge humbucker bolt-on design with a Floyd Rose system. You can still find them on Reverb, and they’re not too expensive. Personally, I can’t see the appeal, although, it’s definitely one of those guitars you can’t easily forget once you see it. Perhaps if it didn’t have all those decals. And that finish. And that shape.

Ulrich Teuffel is a German luthier well-known for his unconventional designs. I first saw the birdfish guitar when I came across a Metallica video with Kirk Hammett playing one, back in the early days of YouTube. It was unlike any guitar I had seen up to that point, or since.

The central feature of the guitar are its two aluminium parts, the ‘bird’ and the ‘fish’. The pickups are interchangeable, and slideable, so you can position them pretty much as you like. But its most fascinating feature, I find, are the interchangeable tonebars. These are made of traditional tonewoods, and are meant to give the instrument a more traditional solidbody characteristic. Teuffel hasn’t just given the guitar a new shape here, he’s reimagined the whole instrument. 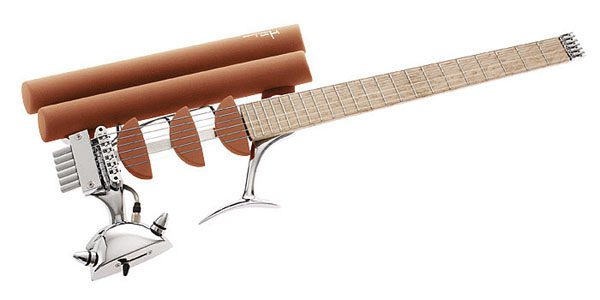 The Bender Distortocaster is probably what would have happened if Dali had a go at designing the Stratocaster. The guitar is, as its name implies, a distorted Stratocaster. The Distortocaster first made its appearance in the 90s. It looks so bizarre, almost as if someone went to town with photoshop. But it is, in fact, real and you can get one from Brian Eastwood Guitars, or choose from one of the other surreal looking instruments they make.

Apart from its body, which is made of a central obeche core with synthetic moulded halves, the specs are similar to most maple neck Strat-style guitars. You get three single-coil Armstrong pickups, and a vintage-style vibrato bridge. And in spite of the body shape, at least in the online video demos, it doesn’t appear cumbersome to play. I really like how the inlay and the headstock are also wavy and match the aesthetic. It’s like looking through a glass vase. You can hear it in the demo video below.

Gibson has made its fair share of odd instruments. The Flying V and the Explorer were probably quite outlandish looking when they debuted in 1958. And thus, perhaps unsurprisingly, disappeared until the world was ready for them. In recent years, under the previous ownership, the company tried to introduce new Firebird X models which were so unpopular that hundreds of them had to be famously destroyed. Who knows, perhaps the world will catch up to them in a few years and they’ll be highly desirable.

Unlike the Firebird X however, the Reverse Flying V was always meant as a limited run, and not really a production instrument. Between 2006 and 2008 Gibson produced the model in limited numbers and offered them in Natural, Ebony, and White finishes. It’s basically a Flying V, with the body flipped backwards. This includes the string-through V tailpiece. The headstock has also been changed from the traditional Flying V one to the Gibson Futura style, so the whole instrument looks like an arrow pointing left.

You get two humbuckers that are wired through a three-way pickup selector and a single master volume control. For more information, check out the video below.

The following guitars didn’t fit my criteria because they’re either one-off instruments and/or, as far as I’m aware, didn’t hit the stage. But I still think they deserve a mention.

A few years ago PRS made a guitar that was rumoured to be part of Lady Gaga’s tour. I’m not sure if the guitar ever did end up on tour. It’s basically a 408 model with extremely long and pointy ends protruding from the horns and the back, as well as the headstock. Finished in a deep pink, it is definitely a sight to behold. You should Google it if you haven’t seen it. It currently resides in Brian’s Guitars, where, I’m assuming, you can go and check it out.

I would also like to mention the Nigel Tufnel Mr Horsepower before wrapping this post up. The Ernie Ball Music Man model for the Spinal Tap guitarist has four humbuckers crammed together! Then the artwork, the array of switches and dials, …the exhaust! The fret marker inlays are also a nice touch.

What are some of the more unconventional guitars you’ve come across? Let us know in the comments section below. 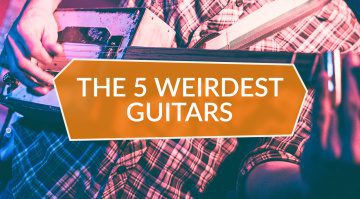 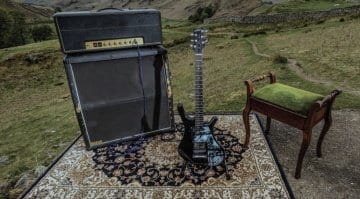 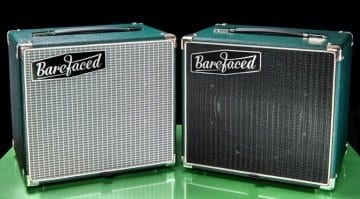 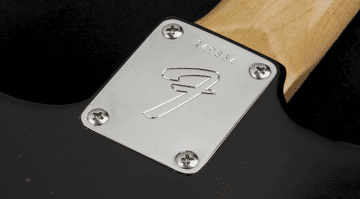 Johnny Marr’s nine pickup Fender Strat has to be mentioned, though unlike the ones in this list, it wasn’t made like that at the factory. From the January 1997 issue of Guitar –
By far the weirdest thing in Marr’s collection, however, is his nine pickup Fender Strat. “I got it really cheap,” he excuses himself, feebly. “Not only are there nine pickups, but there’s an on/off and in/out-of-phase switch for each pickup. I’m not making this up, ‘cos Noel was witness to that dreadful event. Bizarre! But I just thought, if Kraftwerk played guitar, they’d play this! I used it on the rhythm outro of Electronic’s Out Of My League (from Raise The Pressure). I figured it would give some really strange harmonics… and if you just replace the word ‘strange’ with ‘sh*t’, then I was right.”

It was featured in his music video for Spirit Power and Soul and you can see it here –
https://www.instagram.com/p/CTXCrGIKGcG

I assembled a limited production run of the EB/MM Mr Horsepower guitars when I employed at Ernie Ball
https://s6.postimg.cc/rewkhqs8x/EBMM_Mr_Horsepower.jpg

Wow! Awesome! Thanks for sharing! 🙂

Don’t forget the Dewey Decibel Flipout guitar. The Strat shape with the neck attached at the opposite end. I’ve got one in storage. It actually sounded pretty good.