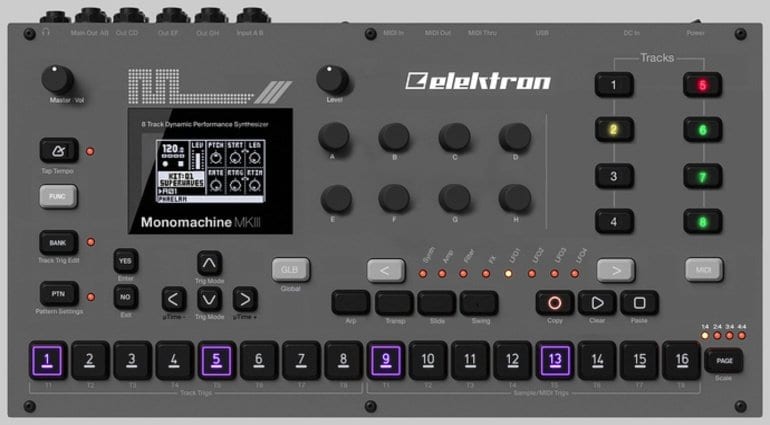 UPDATE: Since this post was written, Elektron have announced the real deal – an FM Synth and sequencer called, you guessed it, Digitone. Find out more HERE

Here’s something many fans of Swedens music hardware innovators Elektron had been fantasising about: a new Monomachine MKIII. And it might not be a pipe-dream, either, because rumour has it that the Swedes have copyrighted the name Digitone worldwide. So what’s the story?

We’re almost certain that the Digitone name has been registered by Elektron. The guys over at matrixsynth.com picked this up yesterday. The form factor suggested by the name Digitone sounds like it would be similar in size to the Digitakt sampler. The second part of the name sounds like a synthesizer or some kind of sound source, rather than an effect unit. But what could that be?

The Elektron user forum has, of course, played host to furious speculation about what Elektron might be presenting at NAMM this year. The Digitone name has been dropped into that conversation, too. Cenk Sayinli, a.k.a. Mr. Dataline, Elektron product guru and main presenter of all Elektron products jumped in on the discussion and wrote:

(using the symbol of the legendary but long-discontinued Monomachine)

OK, so let’s see where this rabbit hole goes. Let’s say Digitone is going to be a dramatically extended Monomachine MKIII in a Digitakt-sized box. Probably with Overbridge 2.0. One user even came up with a mock-up with his ideas for what the Digitone might look like. Before we get too carried away, though, it’s worth remembering that companies register trademarks all the time, and not all of those are turned into products that make it to market.

On a related Elektron topic, Analog series product owners are waiting patiently for a firmware and Overbridge 2.0 update, the latter announced what seems like ages ago. Hopefully, the Swedes will be announcing this update at NAMM. But is that all? Or is there something else in the works no one that’s been flying below the radar and is just about to set NAMM alight? Who knows.