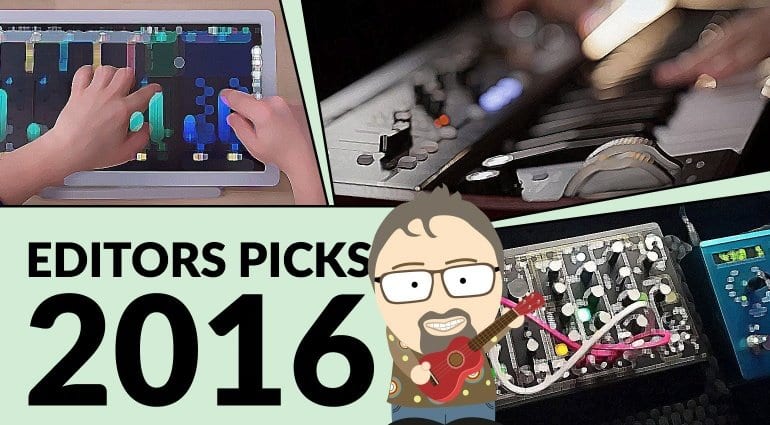 I joined the Gearnews.com team just after Christmas last year and so I’ve experienced a whole year’s worth of writing news and stuff about gear. It’s been an amazing year for new releases. Modular synthesis continues to rise, Kontakt seems to house more and more massive sampled instruments, everyone releases virtual electric pianos, and the MIDI controller keeps getting reinvented on Kickstarter.

But from the whole year, in my realms of software, hardware synthesis, and everything MIDI here’s what I enjoyed the most and might have even bought for myself.

The 0-Coast semi modular patchable mono-synth from Eurorack module developers Make Noise. It’s quite a little bundle of fun. It looks crazy. It’s got these weird lights that are just so different from any other synth. The layout seems strange and there doesn’t seem to be a filter. I first ran into on in the flesh at the Synthfest in Sheffield and loved it immediately. You just have to start fiddling and these noises emerge unlike anything you intended. I’m sure it’s possible to understand it but I’m not sure I want to. I get so much pleasure out of stumbling about with it. There’s no other synth, mono, poly, real or virtual that I can think of that’s so entertaining to play with. 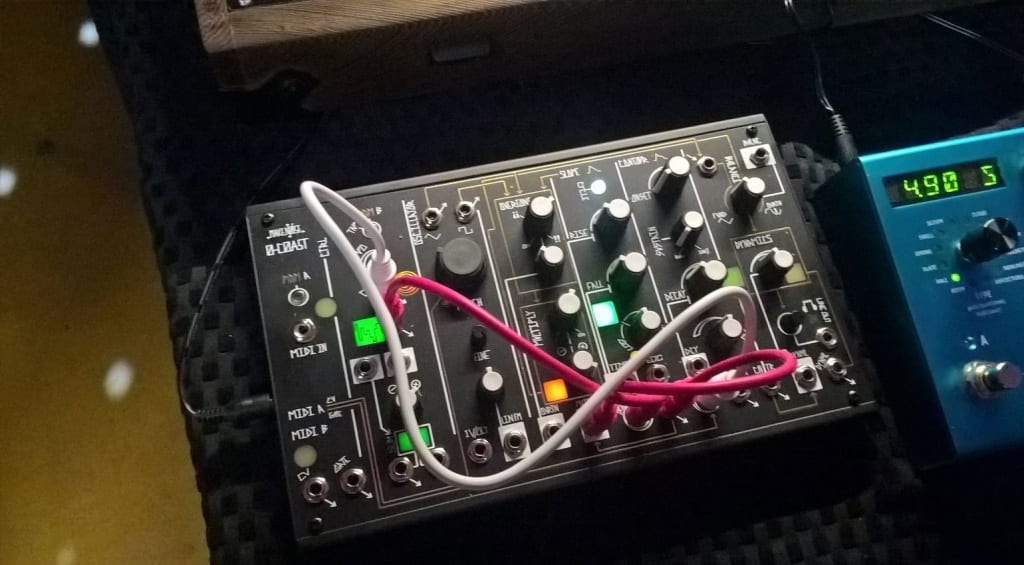 It’s not cheap at a shade under £500 but you get a lot of delight for your money. I have one and I will never part with it.

I make music in the sometimes frustrating world of multi-touch in Windows. Frustrating because touch-screen technology is excellent. It releases you into being creative outside of that terribly narrow focus of a mouse. And yet music manufacturers, who fall over themselves to produce little apps for iPad, can’t seem to see its usefulness on the desktop. Screenforge were this years heroes. They stuck their fingers up at the small and underpowered iPad and produced Yeco, a multi-touch controller for the full-on desktop DAW Ableton Live.

Ableton are the masters of touch interface frustration. It’s the perfect environment for touch – triggering loops and sequences, designed for live performance and yet they force you into mouse or external hardware control. On a Microsoft Surface or hybrid laptop all that control is built into an endlessly customisable screen layout. But everything in Live is too small to touch reliably. Enter Yeco and suddenly Ableton Live is an awesomely touchy live performance DAW. It sucks out all the information from Live and gives you clip launching, mixer, plug-in control as well as keys, pads and weird hexagon things for playing and inputing notes. It’s a joy to work with and pulls an involuntary “YES!” and fistpump out of your the first time it sucks in one of your projects. 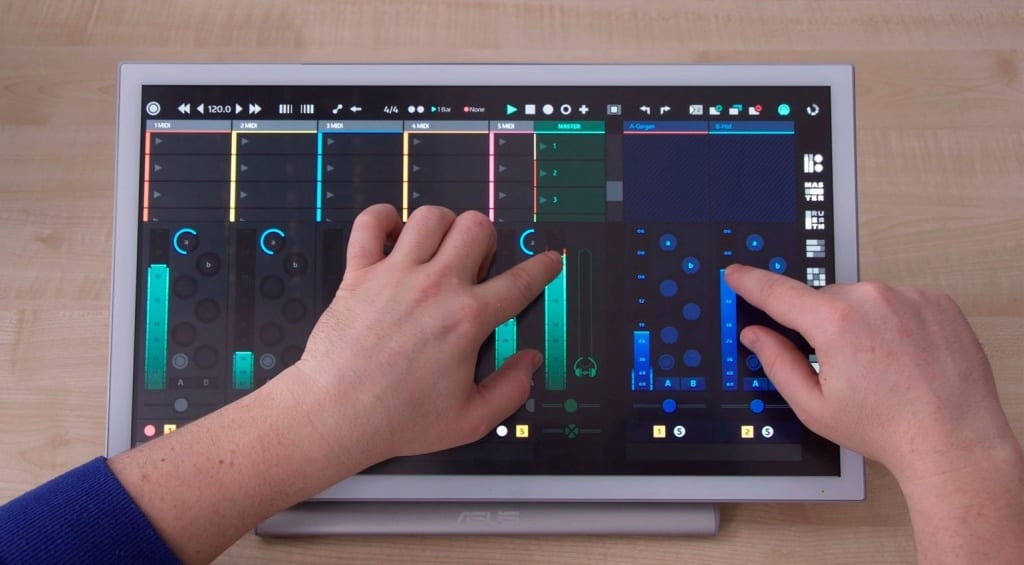 Screenforge completely nailed it. And the best part is that it’s not on another piece of hardware or screen, it’s right here on my Surface, on the same machine as Ableton itself being completely stable and trustworthy. Which is what you need for Live performance.

Well, it’s got to be hasn’t it? Not just for the hardware but for the master class in viral, tease marketing. July was essentially DeepMind month. There was rumour upon rumour. Uli Behringer himself popped up on forums asking leading questions about what they’d like to see in a synth. There was rumours of Behinger hiring people for a Synthesizer Division. And then the videos began. Maddening videos, glimpses of something probably cool – although this is Behringer so nothing is guaranteed in that regard. Industry synth people in the videos all seemed very impressed and then by video number 5 we had a name – DeepMind 12.

It’s a 12 note polyphonic synthesizer that shares a lot of its design with the Roland Juno 106 but goes much further. There’s a load of synthesis behind the panel which can be accessed via the tiny screen or more helpfully through an iPad app. Each voice has 2 DCO’s, a VCF, 3 contour generators, 2 LFO’s and a modulation matrix. There’s a global high pass filter, a bunch of effects and a 49 note velocity and aftertouch sensitive keyboard. It’s a lot of synth. 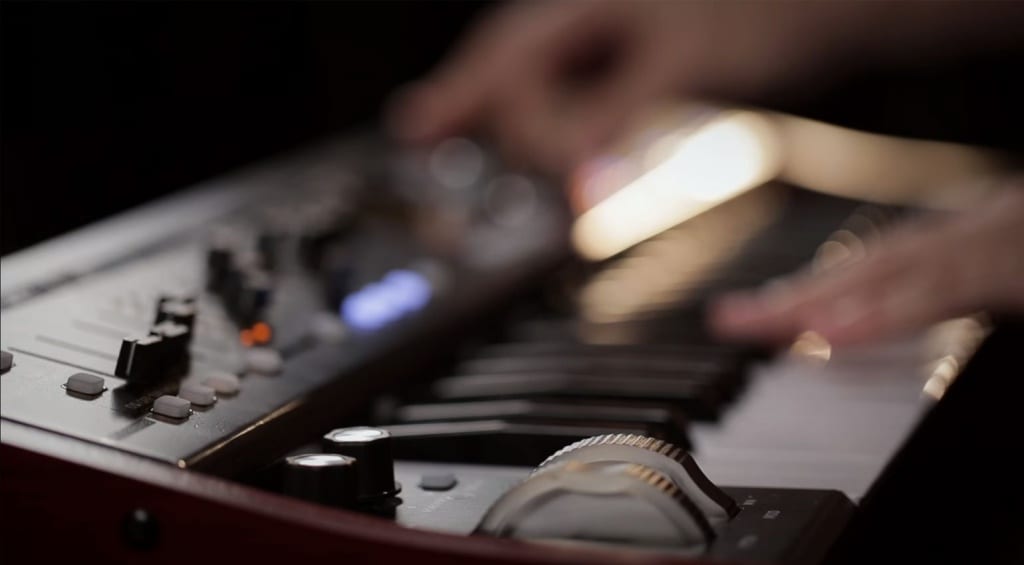 The synthesizer community went wild. Facebook groups appeared, fan clubs arrived and pre-orders were being placed the moment the price was announced as being under a grand. It still doesn’t exist on the Behringer website but a review has appeared in Sound On Sound magazine and YouTube now has plenty of demos. I had a go myself at the Synthfest and it was an enjoyable romp – it sounds a lot like you’d expect it to and that’s all right.

Those three are the bits of gear that really stood out from the crowd. But there was plenty to choose from. There doesn’t seem to be any limit to what people can invent and produce in terms of music making gear and long may it continue. What were your favourite releases of this year? Let me know in the comments.