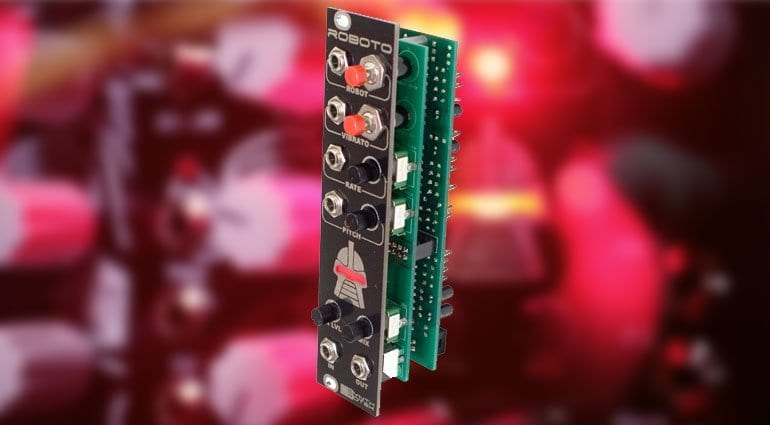 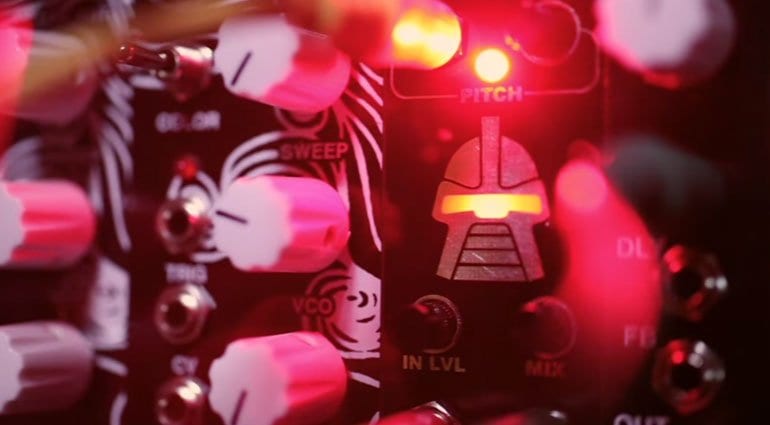 Synthrotek’s Roboto is a vocoding, pitch shifting, 8-bit modulating, bit crushing, lo-fi, speak-n-spell, vibrato effect wrapped up in a 6hp Eurorack module. But never mind all that it’s got a Cylon’s head on the front panel with a glowing eye! “By your command!”

This is all about the bit crushing, robot voice changing, lo-fi type of effects. There are two modes: robot mode and pitch mode. In pitch mode the incoming signal can be pitch shifted up or down. In robot mode it bypasses the pitch shifting and does everything but. So vibrato, for instance, can be on or off in either mode. The rate control handles the master clock for the module, but is also has a major impact on the robot effect in changing the rate of stutter. At low rates it sounds more like a ratchet, whereas once speeded up gives a more recognisable 70’s sci-fi robot modulation.

It’s the sort of effects unit that’s easy to be silly with. It’s funny for a while making voices sound weird and robotic like but I wonder how much long term appeal you can get out of it. Then I saw the video (below) and decided that perhaps I’m selling it rather short. There’s a tonne of lo-fi possibilities here. It’s noisy and fierce but it also appears creative and empowering. And it’s got a friggin’ Cylon glowing at you all the time. There has to be room for that in my rack and in my life.

If you are into lo-fi sounds and want the coolest front panel LED ever invented then the Roboto is for you.

Synthroteks Roboto is released this Friday 10th March and they are taking pre-orders now. It costs $149.99 fully assembled or $99.99 for the kit. More information on the Synthrotek website.

This video is very cool but if you want a run down of the features then skip to the other video beneath it.