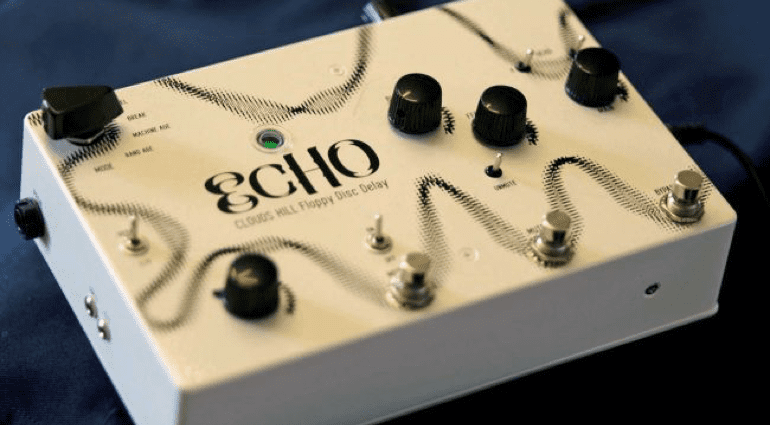 A delay pedal with the heart of its sound coming from a floppy disc, the ECHO Floppy Disc Delay is hand-made in Germany by Clouds Hill. They aren’t cheap and they probably aren’t that easy to come by, but they use a floppy disc instead of tape, analogue BBD or DSP technology to achieve their unique take on a delay.

This pedal is an interesting take on the classic tape delay, using a floppy disc to get the types of tones that once needed tape heads and tape to get your warbles and weird time-based effects. Of course, tape delays were some of the first commercially available delay effects. But they were expensive and hard to maintain. Then along came analogue and finally digital DSP-based delays and we all moved to those.

Now everyone wants those old classic tape delay tones again. Judging by the demos, the ECHO Floppy Disc Delay sounds very similar to these to my ear, but it utilises a 3.5” floppy disc to get the wow and flutter of a tape system. It offers between 6ms and 1.6 seconds of delay time. The effect can be controlled by a footswitch and has inputs for Control Voltage as well. It has controls for acceleration, brake, tape machine ‘age simulation’ for extra wow and flutter and also a random tape machine error simulation effect as well.

The units are available now for preorder and each hand-made in Germany, so the numbers are very limited, currently numbers 2 through to 9 are up for preorder! Price also includes the 15v power adapter as well.

Well, it is actually me (www.nb-instrument.com) who developed this pedal and who is building them now. It was Clouds Hill’s idea to make a tape echo pedal and i came up with the solution to use floppies instead of tape. And then we teamed up to make it happen.
The audio section of this delay is designed the old fashioned way, only discrete transistors, no op-amps or integrated circuits. Like they did it in the 50s when reel to reel got big… This design plus the unique magnetic properties of the floppy disk create a very authentic tape echo sound.
The digital motor control on the other hand adds a variety of possibilities unthinkable in the days of Echolette and Copycat.