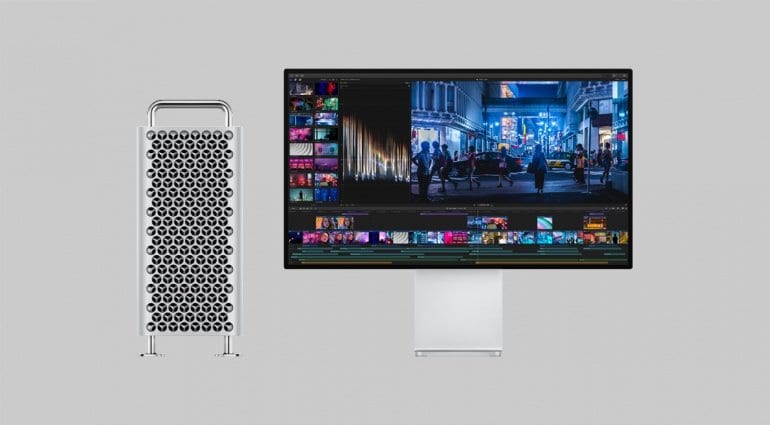 Apple has announced the new Mac Pro at its annual Worldwide Developers Conference (WWDC 2019). In a sharp departure from the previous model, the new Mac Pro brings back PCI Express slots, a whopping eight of them. There’s also the Pro Display XDR, and of course macOS Catalina.

The previous model, nicknamed “trash can”, had a bit of a hard time appealing to serious pro users. Sure, it did turn heads and hardly anyone questioned its power. But the fact that Apple had omitted all internal expansion options didn’t sit too well with the pro crowd.

This is now a thing of the past. The new Mac Pro tosses the “trash can” design and returns to a tower enclosure. There’s a reason for that: Apple is bringing back internal PCI Express slots, no less than eight of them. According to Apple, the machine supports up to six Avid HDX cards, which means higher track counts and processing power for Pro Tools. And who knows, maybe the PCI audio card segment isn’t dead just yet.

For graphics, Apple introduced the so-called MPX module, which is a “graphics expansion architecture with thunderbolt integration and over 500 Watts of power”. The available graphics cards are the Radeon Pro 580X, Radeon Pro Vega II, and Radeon Pro Vega II Duo. According to Apple, the latter delivers 28 teraflops of graphics processing, with 64 GB of memory. Since the Mac Pro can accommodate up to two MPX modules, up to two Radeon Pro Vega II duo cards can be used. One MPX module occupies two PCI Express slots. 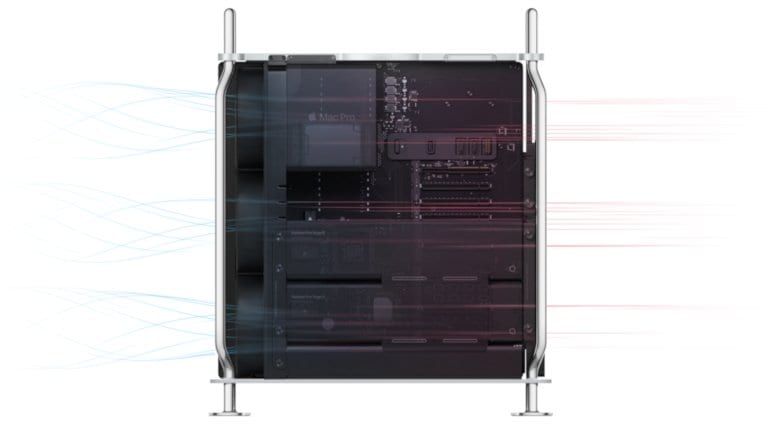 As you would expect from an all-new Mac Pro, the numbers are quite staggering. The new Mac Pro features Intel Xeon processors with up to 28 cores. The power supply delivers 1.4 kilowatts of power, which Apple claims is enough to run the processor at full power, all the time, while providing up to 500 Watts of power to each MPX graphics module. And if you wish, you can deck out the Mac Pro with 1.5 terabytes of RAM. This thing means business.

The prices for the new Apple Mac Pro start at USD 5,999 for the 8-core base model with 32 GB of memory, Radeon Pro 580X graphics and a 256 GB SSD. One can only imagine what a maxed out Mac Pro will cost, but I think we can safely assume that four digits won’t be enough. Apple says that the new Mac Pro will be available in the fall of 2019.

The company also unveiled the Pro Display XDR, a 32-inch Retina 6K display. I always thought that it was a bit weird that Apple had all but abandoned the monitor segment, while making such a big deal out of its iPad and iMac screens. Now the company is back with a new stand-alone display. The Pro Display XDR features a 6016 x 3384 resolution, a 1,000,000:1 contrast ratio,  P3 wide color gamut and 10-bit color for over one billion colors. Apple says that the viewing angle is “superwide”, due to “the industry’s best polarizer technology”.

The display can be rotated on its adjustable stand for portrait-mode work. It can also be removed from the stand, which led to a brief moment of apparent disbelief at WWDC. When they announced the prices for the Pro Display XDR (USD 4,999 / USD 5,999 with nano texture), most people in the audience seemed to think: “Hey, it could have been worse!” Moments later, it was revealed that the stand will be a whopping USD 999 in addition to the display, and the audience went silent as the presenters quickly moved on. If there is one company that can pull this sort of thing off, it’s Apple. But charging an extra thousand bucks for the display stand just ain’t cool – even if it’s a rotating Apple stand.

The successor to macOS Mojave is called Catalina. The main focus of the update is cross-platform interactivity between Macs and iPads. The new macOS lets developers port iPad apps to Mac easily, Apple says. That means that lots of iPad apps will soon also be Mac apps. And many have been waiting for this one: With macOS Catalina, you can use an iPad as a second screen for your Mac. Besides providing additional screen real estate, this means that you can now use Apple Pencil in Mac Apps.

The Death of iTunes

A moment of silence, please! As many had expected, iTunes is no longer with us. The long-running media application is being split in three. In line with iOS, macOS Catalina will feature separate apps for Music, TV, and podcasts. Apple claims that your existing iTunes library will carry over seamlessly. Device syncing will be handled by the Finder, which to me makes a lot of sense.