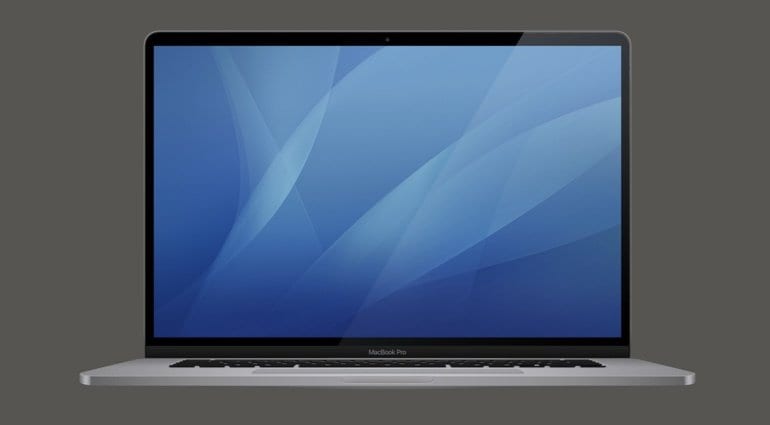 This could be the new 16-inch MacBook Pro.  ·  Source: Mac Generation

Among the most hotly rumoured Apple developments for 2019 is a purported 16-inch MacBook Pro. There is significant interest in the laptop, which is perceived as a chance for Apple to cut ties with the notoriously problematic Butterfly keyboard mechanism and modernize the machine’s design with slim bezels around the screen. These moves could put an end to the biggest complaint users have raised following the MacBook Pro’s 2016 revision, as well as bring a visually and functionally important aspect of its design on even level with high-end Windows machines.

Reportedly, the 16-inch model has entered production at Quanta Computer in Taiwan for a release this or next month. While it is not typical for Apple to hold product launch events after September and October, the new MacBook Pro could receive a ‘surprise’ event-less launch anytime, with just a press release and pre-order page in the Apple web store.

This also happens to be the first time we have tangible evidence for the 16-inch laptop’s development. macOS 10.15.1 beta 1 and beta 2 contain a new icon for the Displays window in System Preferences, which depicts the current device you are using. The new icon portrays a MacBook Pro with notably slimmer screen bezels to make room for a slightly bigger display. The laptop is shown in Silver and Space Gray variants in screenshots first published by Mac Generation.

There are no other clues for potential hardware and design changes. Rumors so far have included a different keyboard layout and mechanism, a physical Escape key placed next to the OLED Touch Bar, and 9-gen Coffee Lake-H processors (up to 8 cores). The 16-inch Retina display resolution is rumoured to be 3072 x 1900 pixels. Regarding the keyboard, Apple is said to be bringing back scissor switch keys with longer travel, quieter typing, and a new glass fibre system for improved reliability.

It seems the goal for this laptop isn’t the introduction of an all-new design, but rather making the most of the current chassis by fitting a larger screen while shipping the new keyboard technology that will make it to next year’s laptops. The 16-inch model will probably replace the current 15.4-inch MacBook Pro, so radical hardware and design changes don’t seem very logical.

Anything for music producers?

Unfortunately, the USB audio glitches supposedly caused by the T2 Security Chip have not been discussed as a possible area for improvement in the rumors that have surfaced so far. Strangely, the conversation around this issue – critical for Mac-based music producers – seems to have withered completely after May this year, with workarounds left in hardware and software manufacturers’ hands.

An unofficial fix is running your USB gear through a Thunderbolt hub, but even this is not a comprehensive solution for all the DAW/interface combinations out there. While not everyone out there has been affected by it, and Apple took measures against the malfunction in a Mojave update, it’s still a major bummer that buying a new MacBook Pro is a literal gamble for owners of USB audio interfaces.

07 Mar · Yeah I guarantee for every person using the site and claiming not to have a problem with the name, there are 10 other people who never signed up and would never sign up due to the name. Then another ...