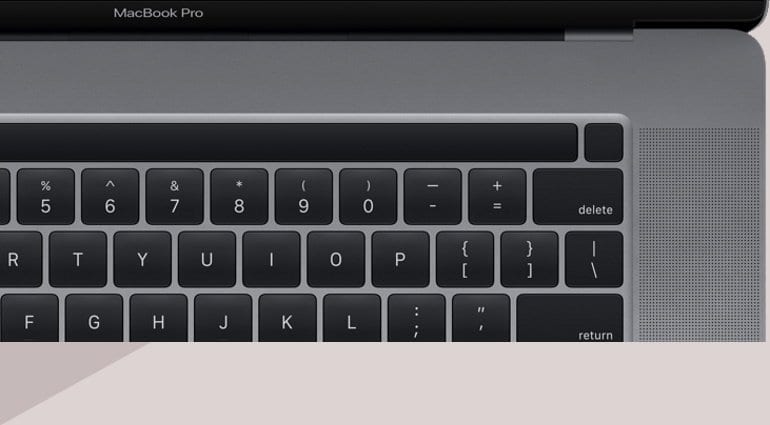 The Power key is feeling special once more.  ·  Source: 9to5mac

Deliberately or not, Apple keeps dropping clues about the rumored – or should I say, impending – 16-inch MacBook Pro. Discovered by 9to5mac, the release of macOS 10.15.1 contains an image depicting a previously unseen MBP keyboard. Basically, the rumors that Apple is separating the Power key with TouchID sensor from the OLED Touch bar. In the current incarnation, said key exists as an indistinct part of the Touch Bar, which I personally find an awkward design decision – even if one of little significance. I mean, the button is there and does what it has to, right? Right.

That’s not quite the case with the Escape key, though. In a convention-breaking move, Apple got rid of it and replaced it with a software version that lives in – you guessed it – the Touch Bar. Honestly, in my 20 years or so of computing, I’ve barely pressed the Esc key outside of computer games. But there may be users out there who aren’t keen on the Esc key appearing on an OLED bar at Apple’s whim. So the 16-inch MacBook Pro is, quite likely, bringing the physical Esc key back. That and the separate Power/TouchID button will make for a more uniform keyboard, which is also said to benefit from a mechanical redesign. Word is, the distinctly problematic Butterfly switches are being replaced with scissor switches and additional ingress protection. Let’s hope for a reliable and comfortable keyboard this time around.

So what about the release date?

Unless Apple pulls a surprise launch today, October 31, it looks like the new MacBook Pro may be left for next year. That, or a November launch in time for Christmas. It’s kind of up in the air, but the removal of the 16-inch MBP icon in the latest Catalina release makes something of a statement. The laptop isn’t ready for prime-time just yet.

As a brief recap, the 16-inch MacBook Pro is a touch-up of the current 15-inch MBP which makes better use of the available screen real estate to fit a slightly larger display in the same chassis. That and the keyboard tweaks seem to be all there is to it, which is still very welcome change.

We love these machines here at Gearnews, so we’ll be keeping you posted with updates as they come.