Owing in part to the custom USB controller and security chips Apple uses in its computers, some 2018 Mac models are plagued by glitching, unstable USB audio – not with every interface and under every scenario, but there is a legitimate issue.

Naturally, such performance hiccups are unacceptable considering Macs’ reputation as music making machines. So Apple has been on the case for a while, and behold – the latest Mojave update (10.14.4), released yesterday, quietly improves the situation as mentioned in the release notes and in beta test user feedback.

MacBook Air, MacBook Pro, and Mac mini models from 2018 are now said to work mostly correctly with USB audio interfaces. According to feedback, the fix is partial, as symptoms are said to be reduced, yet not fully eliminated, and also dependent on the interface that’s in use.

Apple is keeping mum on the situation, as it so often happens when technical scrutiny surfaces. Though USB is now doable on 2018 machines, Thunderbolt remains a safer choice for external digital audio. You can get a USB to Thunderbolt adapter to make the switch if your interface doesn’t have TB connectivity.

Even if you aren’t experiencing any problems with your USB interface, you are advised to update ASAP (if you are on Mojave, of course). The update is available from the Mac app store. Personally, I have had no glitching issues thus far under Mojave with the USB-C interface I’m using on my 2018 MBP, but everyone’s mileage may vary. Anyone among you care to report your experience with using an USB interface on a 2018 Mac in the comments? 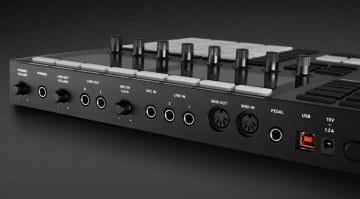