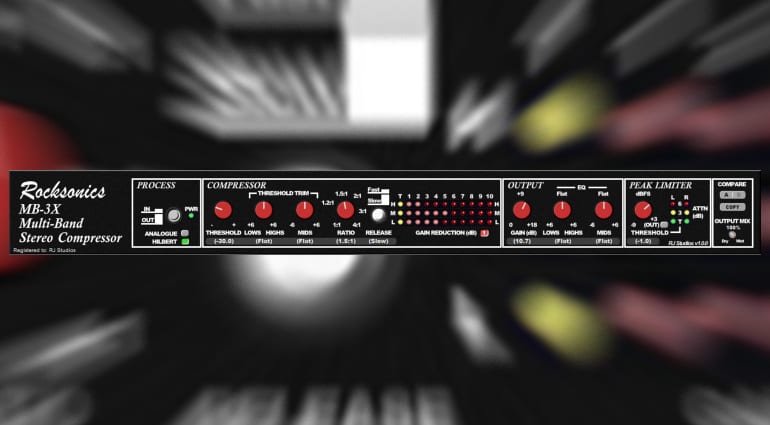 Developer Raising Jake Studios added a new workhorse to its stable – an emulation of the old Rocksonics MB-3X Multi-Band Stereo Compressor. Manufactured in the mid 90’s, the unit is an analog mastering grade compressor/limiter designed for extremely low harmonic distortion and musical compression.

The design employs several layers of amplitude-dependent RMS level detectors. This results in a smooth compression and low distortion. Despite its inner complexity, the compressor is relatively simple to set up. It has three fixed bands of compression divided by constant amplitude Bessel crossovers. This approach is said to produce very low phase distortion and no pre-ringing artifacts whatsoever. In reality, you simply set the threshold to compress the low, high and mid frequencies separately. There’s also a single threshold control to set the nominal compressor threshold, as well as ratio and output controls.

Improvements over the original

Like most plug-in emulations, MB-3X builds on the original with useful added functionality. There is A/B memory recall of two different sets of settings, with both states saved in the DAW together with your project. There are also parallel compression (Wet/Dry) control knobs for the Low, High, and Mid frequencies as well as the entire compressed signal. The Analogue control is there to add some pleasant harmonic distortion for more heft and presence. Below it is the Hilbert control which reduces harmonic distortion to inaudible levels. The compressor also switches between mono and stereo operation automatically according to your tracks, reducing CPU load.

All in all, it’s nice to have this beloved, but forgotten relic back in modern plug-in form. I’m sure the developer has done it justice.

MB-3X is priced USD 70 + tax where applicable. A demo version is available for download. The formats are VST2, VST3, AAX, and AU for 64-bit Windows and Mac computers.