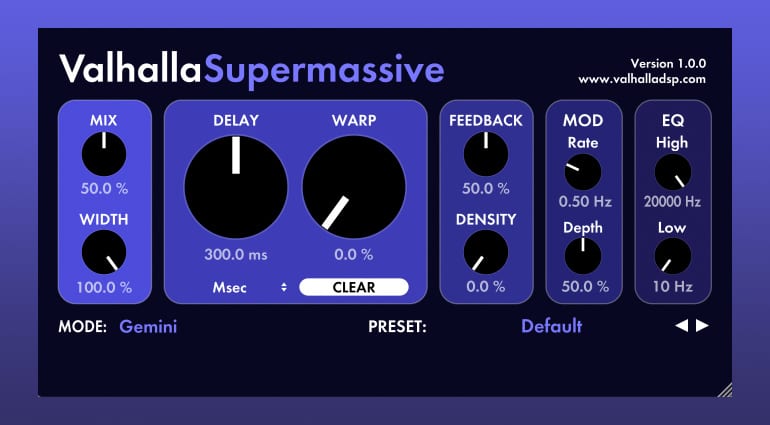 Valhalla Supermassive is a new effects plug-in based on feedback delay networks. If I’m getting this right, that’s a bunch of delays mixed together and interconnected by feedback. There are eight modes which affect the attack, decay and density of the echoes, resulting in a wide variety of sounds.

Like most Valhalla plug-ins, Supermassive has a very clean GUI with a simple set of controls. Much of it looks like a fairly standard delay plug-in, with controls for the delay time (up to 2 seconds), feedback, mix, width and a 2-band EQ. The Warp knob is where it gets interesting. According to the developer, this spreads out the delay times of the delays in the feedback network relative to the delay setting. Valhalla DSP says that this can transform a sound from a simple delay to more resonant echoes and lush reverbs.

The density knob, which controls the number of perceived echoes in the output, is another way to explore the territory between delays and reverb. Finally, the plug-in offers a sine wave LFO for modulating the delay times, which results in chorus and flanger effects.

The developer says that Supermassive contains concepts that he’s been thinking about for many years. Apparently, it’s based on a bunch of ideas that were too weird for other plug-ins like Valhalla Delay. That can only be a good thing! And did we mention that Supermassive is free? You don’t even have to create a user account or leave your email address. Just download it from Valhalla’s website and you’re ready to go. Thanks, Sean!!!

3 responses to “Valhalla Supermassive: Reverbs and delays from another galaxy – for free!”

It truly seems like a monster of a plugin. A massive thanks to Sean for being so generous it almost feels like Xmas.
Note: you wrote Supernatural twice instead of Supermassive. (You can delete this Note line when you publish my comment.)