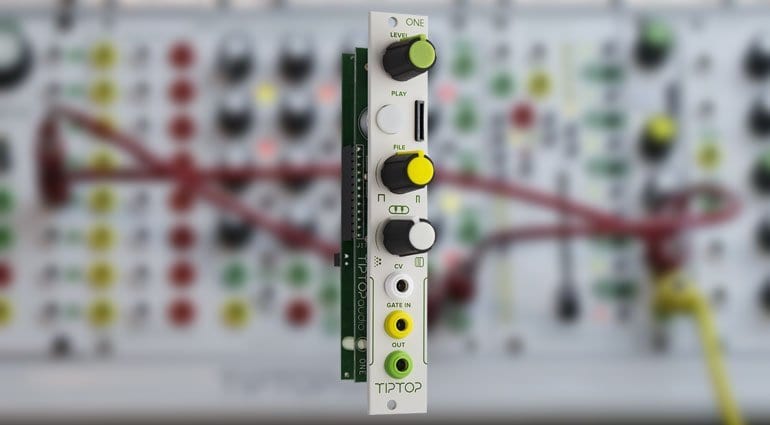 Tiptop Audio were teasing their new mysterious ONE module just before NAMM. Well, happily the guessing is over as they’ve revealed ONE to be a sample player wrapped up in a neat 4HP Eurorack module. I was at least right about what the image of a memory card indicated.

While the name makes me think of a U2 track with buffalos running about, the sounds in the demo video made me think immediately of the Tron DigiDrum sampler for the Commodore 64 from 1985. I’m obviously having a nostalgic morning. None of that has much to do with Tiptop Audio’s ONE 24bit 96kHz mono sample player.

At a basic level you stick a sample on an SD card, and ONE plays it in response to a gate input. They call this “Trigger mode”. Whatever you put on the card is what comes out with no added processing or EQ or normalisation. The playback is a transparent, up to 24bit 96kHz with a latency as low as 1.25ms. That’s simple enough, but actually, there’s a lot more going on here. Tiptop say that ONE handles “digital audio bits as a continuously manipulated electrical flow”. What does that mean in reality? I’m not sure, but maybe as we dig a little deeper it will reveal itself.

The single CV input can offer three different functions, dialled in by the knob above the socket. Turn to the left for free pitch control which tunes the playback rate to give everything from subtle vibrato to more extreme tape stop type effects. The centre position, which doesn’t look anything like a French bread roll, is, in fact, a quantized pitch mode. This maps the incoming CV to the standard 12 notes of the western scale over 3.5 octaves. This is the option you’ll want for using your samples for melodies. The third option, turned all the way to the right, accesses the different samples on the card. The CV can then select different samples creating a percussive experience that prompted my DigiDrum recall.

In the tease videos it became clear that they were working with content producers Glitchmachines. They have also tapped into that popular pool of the “best sound designers in the industry” that everyone seems to use these days. The idea is create some sound library that makes use of ONEs features. Included with every ONE is an SD card with 60 sounds designed by Glitchmachines ready to go. More cards with specially designed content will become available to purchase separately. This is a pretty cool idea, although I imagine, knowing Eurorack users, that they will be immediately over-writing the Glitchmachines card with their own samples.

There’s one last trick to mention which is that if you drop in an SD card that has LFO signals, slopes, envelopes or other random CVs the ONE will play those as well. Patch the output to a CV input somewhere else and suddenly it’s become a module with a whole load of new and interesting modulation and control possibilities. That’s a really nice feature.

ONE should be available about now but there’s no detail about it on the web page and so I’m not sure what the price or availability is. I’ll update you as soon as I can. As for the “continuously manipulated electrical flow” thing – no, I’m still not sure what they mean. 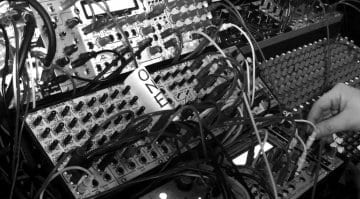