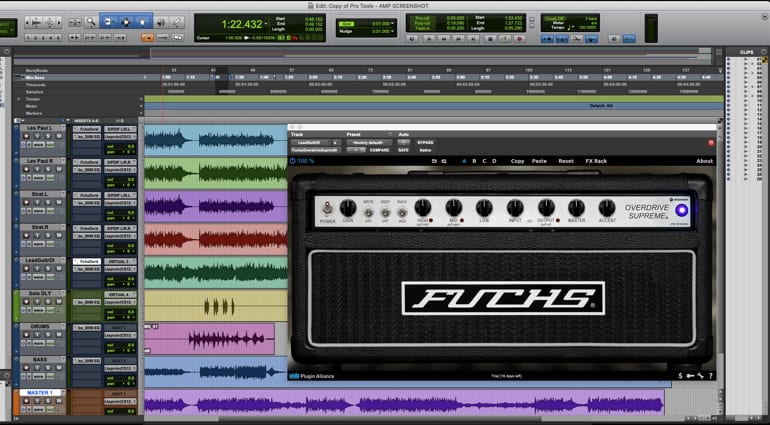 The Fuchs Overdrive Supreme 50 amp plug-in is billed as being able to handle everything from ‘crystal clear and highly detailed clean sounds to its harmonically complex and eloquent overdrive’. A pretty bold statement to make for any plug-in, so how does it hold up?

The virtual amp has two channels. The first is CLEAN, which has a BRITE, a DEEP, and a ROCK/JAZZ switch. These switches change the way the tone controls operate and interact. The ROCK switch is meant to be more aggressive and punchier, with a brighter tone, while the the JAZZ setting leaner and more audiophile-like. The clean channel can also act as a preamp for the overdrive channel of the amp, giving you plenty of control to shape your tone the way you want.

The second channel is the OVERDRIVE. This features separate OD in and OD out controls. The OD-in sets your level of saturation, while the OD-out controls the balance between the amp’s clean and dirty channel.

The amp’s virtual EQ appears to have a pretty flexible, yet simple control section. It is based around passive high, mid and low tone controls. Whilst the high control can be pulled out for a boost in mid-frequencies, the mid control can also be virtual-pulled out for added gain boost.

The plug-in runs on PC or Mac in AAX DSP, AAX Native, AU, AAX AudioSuite, VST2, VST3 formats. You can hear a quick teaser of it in the official demo video below, or follow my link to download a 14-day fully functional trial to test it out for yourself.