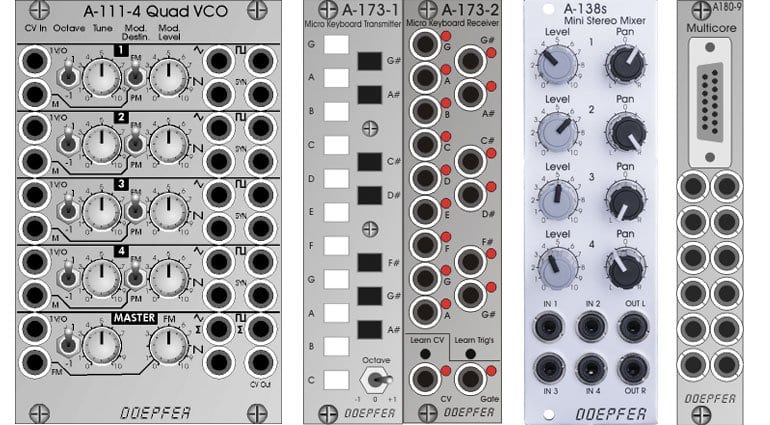 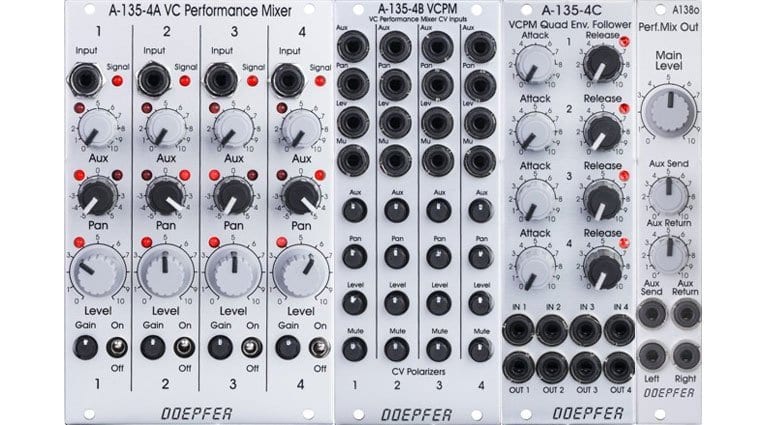 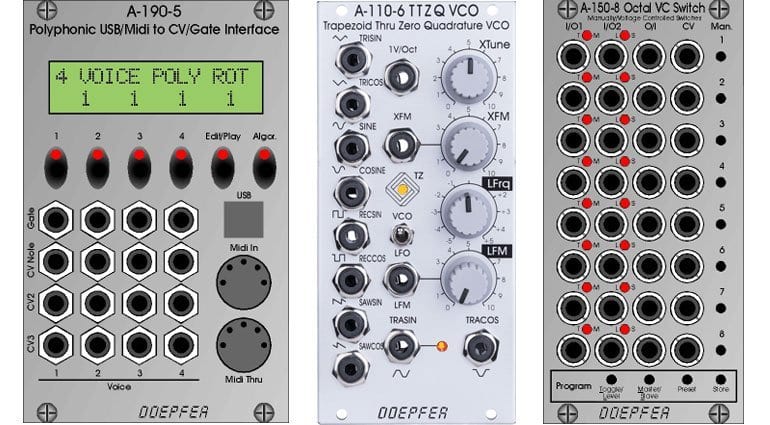 We’re just a week away from Superbooth 2017 in Berlin. Doepfer are the first major modular company to announce details of new stuff. They’ve got a whole bunch of imaginatively named modules, and some cases too.

First up is the A-111-4, which is bit like packing four A111-3 VCO’s into a single module. Each VCO has individual controls, three waveform outputs, FM and PWM modulation inputs, an octave switch and a sync input. The Master section features sum outputs of all three waveforms along with a 1v/Octave CV input and FM input.

You can use it as a fat sounding monophonic VCO, create paraphonic patches or even go fully polyphonic with a suitable device for sending it chords or polyphonic notes. Talking of which, that’s exactly why they are also introducing the A-190-5 (below).

The A-190-5 is a control unit module that’s ideal for using with the A-111-4 Quad VCO. It will take MIDI information via MIDI connection or USB and produce four individual channels of CV outputs, with note, gate and two lots of control. It comes with various modes to give it a polyphonic, duophonic, paraphonic or monophonic flavour. It’s got a nice big LCD display telling you what’s going on.

It’s also expected in the summer for around €300.

A two module combo to give you some manually controlled 1V/Octave CV signal. The A-173-1 is a mini keyboard transmitter whereas the A-173-2 is a receiver that takes the keyboard signals and generates gates and triggers. At the bottom of the A-173-2 is your regular 1V/Octave CV output and gate. The rest of the module has gate outputs for each key on the A-173-1. I haven’t quite got my head around what that would be useful for. It does mean that you can gate other signals without affecting the ongoing CV output.

The two modules are connected internally by means of a 2 pin cable which enables you to place the modules wherever you like.

Should be available in the summer for €180 for both.

The A-138s looks deliciously simple and useful as a four input, stereo mixer with panning. It’s available the end of May for €75 and I think I’ll order one now.

This is an interesting tool. The A-180-9 provides a single cable method of transferring 12 signals between different cases or rows. It uses a single D-Sub cable and is completely passive.

Released in the summer for €120 for two modules and the cable.

It should be coupled to the A-138o mixer output module to produce a very comprehensive and controllable performance mixer.

This is a brand new oscillator design from Doepfer. The A-110-6 uses a quadrature trapezoid as the standard waveform. It also offers linear thru zero frequency modulation and two phase shifted trapezoid outputs. That all sounds very complex and I look forward to hearing what it’s all about when I get to Superbooth.

The A-150-8 is a module of 8 switches. Either manually controlled via a little button or voltage controlled. The switches are bi-directional and each channel can be set to trigger mode or level mode. It’s also possible to define Master and Slave groups.

Doepfer are also introducing some low-cost versions of their monster cases. The A-100LCM9 and A-100LCMB will be available in the summer but they haven’t quite decided on the pricing yet.

For more detailed information on these new modules head over to the Doepfer website. We’ll see if we can add some real images and video of them in action from the Superbooth show next week.