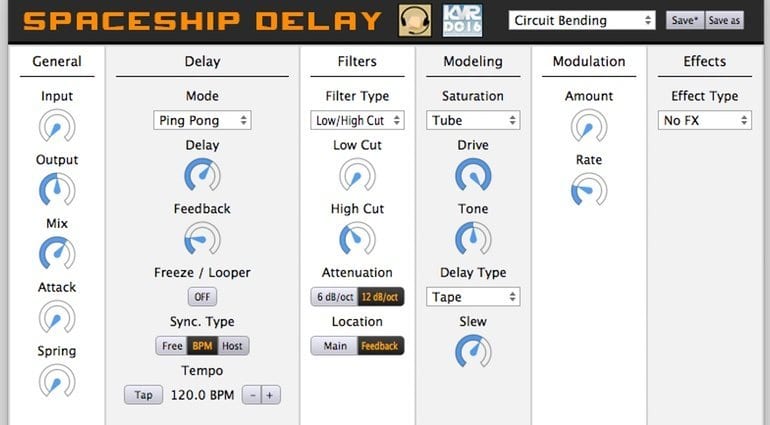 Amongst the many entries for KVR’s Developer Challenge was this interesting entry: the Spaceship Delay by Musical Entropy. It’s a full-featured delay which its maker has chosen to make available for free. Yes, the internet is awash with free plug-ins, and most of them are less than stellar. But this is an exception, with a lot to offer both in terms of sonics and features. And priced at Zero Pounds, what have you got to lose?

The drab, functional GUI is arranged into several strips, labelled General, Delay, Filters, Modeling, Modulation and Effects. There are some three standard delay modes, single, ping-pong and dual/stereo, as well as the usual controls such as delay time in milliseconds and time. But also available are more interesting parameters such as “Spring”, a spring-style reverb or a Freeze/Looper control, whose feedback setting goes up to 110%. The Filter section offers Low/High Pass, Shelf and two synth filters euphemistically labelled “Japanese” and “German/Canadian”.

But we’re only just getting started. The Modeling strip has a saturation effect, where users can choose from Hard and Soft Clip, Tube and Bitcrusher. There are three delay types on offer: Modern, Tape and Digital. The Modulation strip is a bit sparser, with only two self-explanatory controls in the form of Amount and Rate. On the far right, we have an Effects area, which includes another High/Low Cut or Shelf; calling up what’s described by as a “vintage” phaser displays Amount, Rate, Feedback and Dry/Wet controls. Phew!

Not bad for a free delay! There are a lot of creative options here, and given the price tag there’s no reason not to try it out. The Looper function, filter and saturation controls, in particular, are enticing me to play around and see what this plug.in can do. The audio examples sound decent, although there are too few to showcase the potential on offer here.

I also like the fact that there’s no luscious GUI for you to salivate over. You rely on your hearing to tell you if this effect sounds good, and if it’s altering your signal in good way. Plugs like this are a lot less susceptible to psychoacoustic effects, as there’s no elaborate picture to fool your ears into thinking it sounds good.

Spaceship Delay is available now in VST and AU for 32- and 64-bit Mac OS and Windows via its page on KVR. If you want to vote in the competition – which is ends on 18th December – head over to the KVR Developers Challenge page. 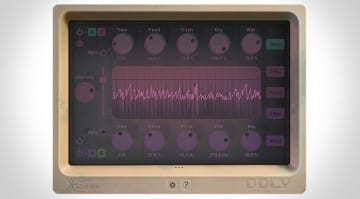 Delay yourself for free with iZotope DDLY Dynamic Delay