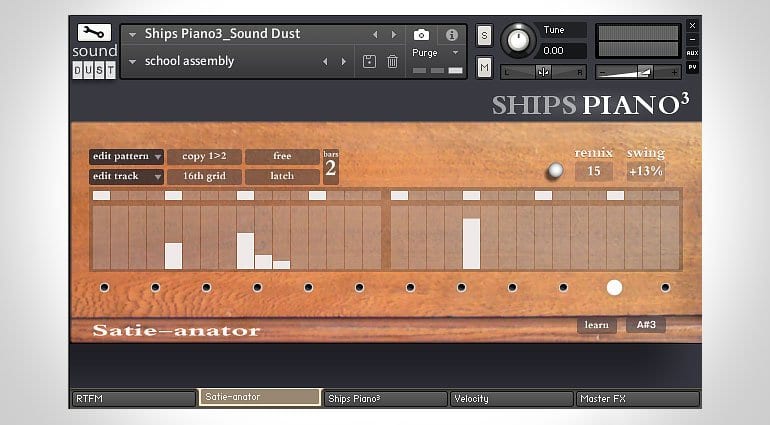 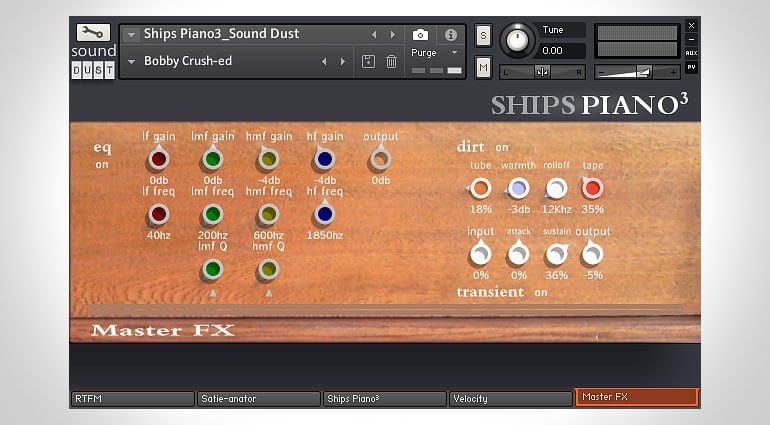 The Ships Piano is a tiny upright piano designed in the late 1800’s for fitting into the cramped confines of Victorian pleasure boats. Apparently Captain Scott (of the Antarctic) was a fan and always had one onboard for a good old sing-a-long in the frozen waters of the south Atlantic. Sound Dust is the virtual instrument output of Brighton based sound designer and composer Pendle Poucher and he readily admits that the Ships Piano is not a great piano – this is not about lush tones, it’s about character and charm. It has a small frame, only 5 octaves with very flabby bass strings in order to reach the lower notes. Pendle says “it is very plinky without being too plonky”.

This, version 3 of Ships Piano, brings in two other less than perfect pianos to triple down on the character and combine different aspects to create weird and wonderful sounding piano hybrids. The first addition is a grand piano called the School Grand recorded binaurally in an old school chapel. The second is his own battered upright which was recorded binaurally and then reversed into a hardware reverb, sampled and then reversed again to create a backwards attack effect. You then have this very simple and beautiful interface that allows you to mix the three pianos together. You can choose the sample start position, envelope, high and low pass filter, vibrato (which goes far further than vibrato ever has a right to) and then a convolution reverb with 24 impulses per piano.

The mix of these pianos, the movement and interplay of tone and character is absorbing to listen to. Pendle pitches the video below perfectly with these sublime piano sounds surrounded by his improvised, Dave Attenborough-esque, narration. But it doesn’t stop there. Ships Piano 3 also has what he calls the Satie-anator which is a step sequencer with 12 sequences and 12 channels. Once your sequence has taken shape you can fool with it by increasing a “Remix” value to sort of randomise the step progression. The sequences are mapped to key-switch notes for easy access. There’s also a scale quantise which will force the notes into various scales and keys, again mapped to another octave each worth of key-switches. It makes for a very creative and natural way to modulate and play with the music.

It’s refreshing to find something so beautifully understated and charming amongst the deluge of huge Kontakt based sample instruments marketed with much fanfare and hyperbole. The collection of boutique instruments at Sound Dust is sublime and if, like me, this is the first time you’ve come across Mr Poucher then I’d recommend checking them all out for something softly inspirational.

Ships Piano 3 is available for OSX and Windows on the full version of Kontakt 5.5.1 and above for £30. If you get in there before the 10th April you can get 30% off with the discount code AHOYTHERE. 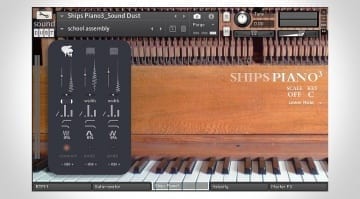 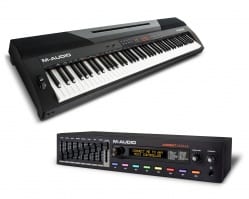