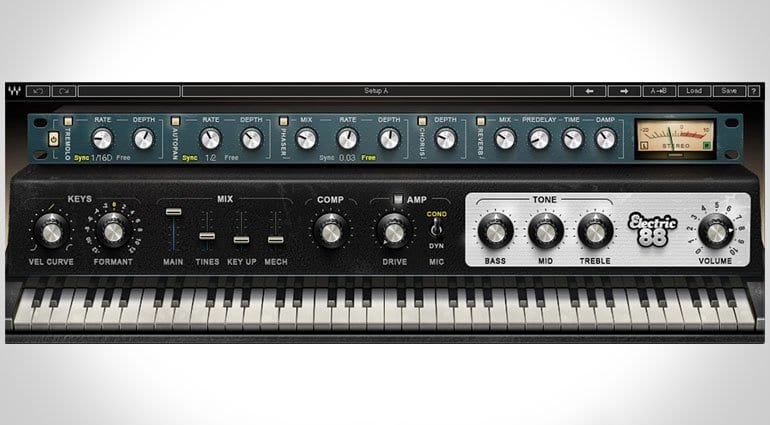 I wasn’t sure that Waves did virtual instruments. I had to go and have a look. I unearthed a couple of synths from a year or so ago hidden among the hundreds of effect plug-ins you usually associate with Waves. Anyway, unexpectedly, Waves have released the Electric 88 piano – didn’t see that coming.

Waves wanted to capture the sort of uniqueness and beauty of an instrument that could move you to tears. Maybe if we all go and download the demo we could have a collective weep as we noodle on the keys. To achieve this they found a “road-worn” hunk of junk and got to work sampling the soul out of it. They took multiple samples of every key, to preserve the character, and it was all done by hand in order to retain the human feel. In other words they found a really cool vintage piano and tried their best not to screw it up.

Waves have added a lot of processing and mixing options from their palette of effects. The amount of background and mechanical noise can be controlled, along with Tines level and Key Up sound. There’s a formant control that shifts the samples in a detuning kind of way. The effects rack has a bit of tremolo, autopan, phaser, chorus and reverb effects plus a side of EQ.

At the moment there are a number of electric pianos knocking around. Arturia included one in their V Collection that was updated very recently. There’s something about that sound that keeps us coming back. All of them, of course, “painstakingly” sampled. We’re going to have to come with a pain-stake scale of some kind after we’ve worked out what a pain-stake is.

Anyway, I love an electric piano and the Electric 88 looks great. I have to say though that the music behind the intro video (below) is some of the most dull and lifeless middle-of-the-road jazz I’ve heard in a long time. Not really giving us your best side with that, Waves.

Waves Electric 88 Piano is available now for a stunning USD $39 and there’s a demo version so you can try it out yourself before parting with your cash. It’s stand-alone and a VST/AU/AAX plug-in for OSX and Windows.