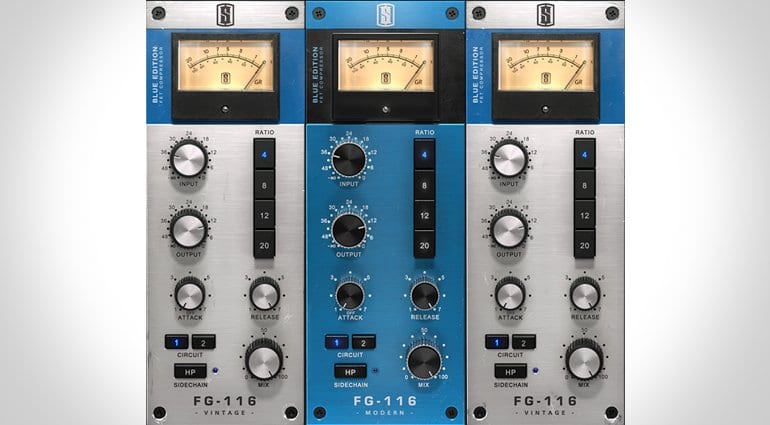 As a result of the original Blue Stripe 1176 hardware compressors often being hailed as one of the greatest compressors we know, there are numerous ‘virtual’ options available today. But for Slate, this won’t just be a case of adding the famous blue compressor to their list of modules. They’ll need to offer something extra. They have clearly stepped up to the mark, and now present their take on this classic.

Generally speaking I’m a fan of Slate plugins, as they offer a different tone and set of characteristics compared to other manufacturers. Although not always my first choice for technical reasons, I do turn to some of their plugins whenever possible. One thing is for sure: they are one of the best at emulating classic gear and implementing their own modern twist. Thankfully, this is exactly what they’ve done with these new FG-116 modules.

Sonically I’m expecting these to showcase some of the best emulating work Slate have done to date. This is due to them having one of the best plugin developer teams around at the moment, and simply because the original Blue 1176 is so highly regarded they will need to do it justice. I haven’t used these new modules yet myself, but initial feedback is strong.

There are two modules in this new series; one is aimed at being a very close emulation of the original, and the second is Slate’s own modern ‘hot rodded’ version. I really appreciate this concept of offering both as apposed to trying to release one module somewhere in the middle. The original blue-strip 1176 can be quite aggressive for some sources, and Slate have recognised this in developing their own smoother version. Yes, it’s very nice having all these closely matched emulations, but the modern style of mixing has changed and it’s great to see manufacturers like this providing up-to-date tools.

Slate have also accessed the benefits that the virtual world can offer, adding plugin-only features. These come in the form of 2 different circuit emulations on each module for slightly different sonic behaviours. Each module also features a high-pass filter side-chain, which is ideal considering the fast attack times this compressors use. Other features include the commonly found ‘mix’ control for blending the processed signal with the original, and apparently by Shift-clicking on the attack parameter, the compression is bypassed leaving the modules to be alternative pre-amps.

For any Slate Digital subscribers to the ‘everything bundle’, these plugins are a free download, showing the continued high rate of development by Slate’s team. There are many more plugins / modules scheduled for release this year too, so watch this space. If you’re not a subscriber, then these might provide the excuse you were looking for, with the subscription priced at 25 USD per month, or 299 USD per year. There is currently a special offer available for the ‘everything bundle’ annual plan, priced at 274 USD. Alternatively, if you want to buy just these compressors, there is an introductory offer of 149 USD. Click here to visit the web page for these new plugins.

Here’s a video of Steven demonstrating these new plugins, including some interesting facts about their design, and some tips and tricks. The video is from YouTube, on the SlateTV channel: