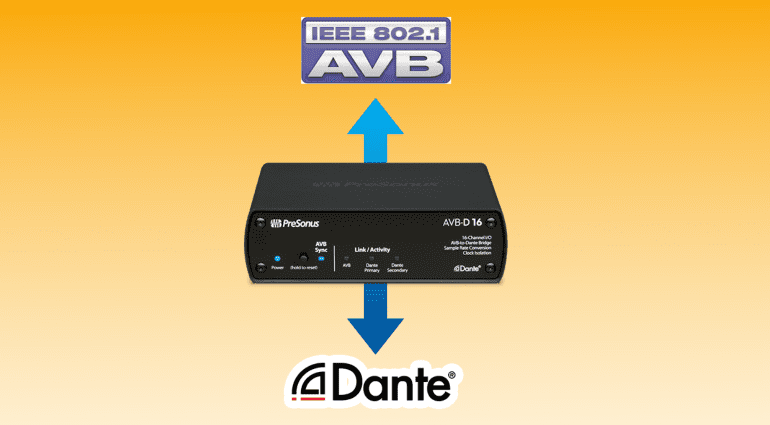 We recently published our guide on audio networking and offered our opinion on the great AVB vs Dante debate. In short, we suggested that AVB has much to offer but few manufacturers have adopted it seriously. In contrast, you’ll find the more costly Dante networking format adopted extensively across the industry. PreSonus, one of the few manufacturers to back AVB, has just released a new device to bridge AVB and Dante. Surprising? Not really…

The AVB-D16 is a simple “plug and play” device, giving you a 16-channel bridge with one AVB network port and conversion to redundant Dante network ports. Additionally, we applaud Presonus’ decision to use professional etherCON connections. The AVB-D16 will also act as a handy sample rate converter between networks. That’s ideal if, for example, your AVB gear is running at 48kHz and you want to connect to a 96kHz Dante network.

Hotting up for Dante?

The “elephant in the room”, though, is the bigger topic of audio network compatibility moving forwards. Clearly, PreSonus has identified a need to interface their StudioLive III mixers, stage boxes and monitor boxes with the world of Dante. Don’t forget that all this comes just 18 months after the launch of the StudioLive III range. We can’t help asking: Is this an admission that PreSonus has backed the wrong format?

As far as the merits of this new box goes, it’s certainly not the biggest inconvenience to have to plug in an interface box. What’s undoubtedly an inconvenience though is the price: $599.95 That’s a lot of money to have to pay out so soon after the launch of a new product range. How soon before we see a revision of the StudioLive series with native Dante support? In today’s pro-audio landscape, we’d say it’s a revision which needs to arrive with some urgency…

2 responses to “PreSonus AVB-D16 AVB to Dante Bridge: Is it time to admit that AVB is dead?”

Is there a instructional video showing us how to set up the D16 to let’s say a Yamaha Dante Network to access their house speakers to be controlled with my Series lll Presonus mixers 64s ? do you need the dante software to set it up ? etc….

Your comment does highlight a very valid point though; Dante requires specialist knowledge and a learning commitment to really understand it and make the most from it.