We hear that RME is expanding its audio networking catalogue with the impending launch of Digiface Dante and Digiface AVB. Both are USB 3.0 mobile audio networking interfaces that offer different things. The two new boxes are to be presented today at NAB in Las Vegas, according to the Gearjunkies website. We covered rumours about a new Dante or AVB box back in December, so it looks like we were on the money.

Digiface Dante, apparently, can transmit up to 64 Dante channels and 64 MADI channels over USB 3.0. It adds an external option for fully mobile operation to the previously available Internal Dante PICe card. The Digiface can be powered both by an external power supply and USB power.

Both BNC sockets for the word clock I/O can be switched to MADI I/O. A total of 128 Dante and MADI channels can be controlled via the included Dante control software and the DSP-based RME TotalMix FX mixer which offers comprehensive routing and monitoring options. With it, users can create independent sub-mixes according to the number of available outputs.

Additionally, Digiface Dante has two banks of redundant network ports which can be used as both inputs and outputs, along with network switches for redundant operation with primary and secondary networks in case of increased security requirements. Furthermore, the interface can be used as a mobile 64-channel Dante/MADI converter if the USB connection is not in use.

Finally, the product offers a headphone monitor output that can be used as a line output for listening to an optional analog stereo mixdown. That’s in addition to USB 3.0, Dante, word clock I/O, and the power supply connector.

Digiface AVB transmits up to 256 network audio channels between a Windows PC and other AVB devices within an audio Gigabit network over USB 3.0. The interface is USB bus-powered and uses the open IEEE 802.1 protocol as part of the AVB standard of the Audio/Video Bridging Task Group. Synchronized and prioritized streaming of audio data over a gigabit network is enabled. The interface also features word clock I/O and a headphone output alongside the DSP-based TotalMix FX mixer and an AVDECC controller, which enables detection of all AVB devices within a network and lets users manage and monitor incoming and outgoing streams.

RME hasn’t announced price and availability information yet. We will update this post when the info appears. 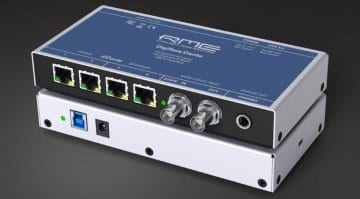 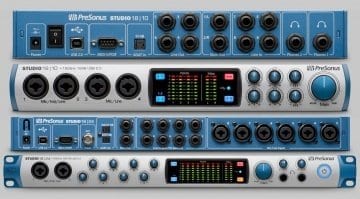 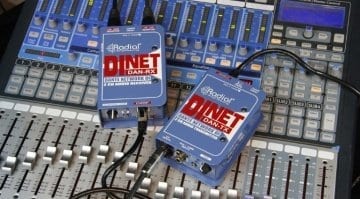 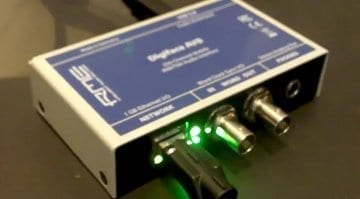