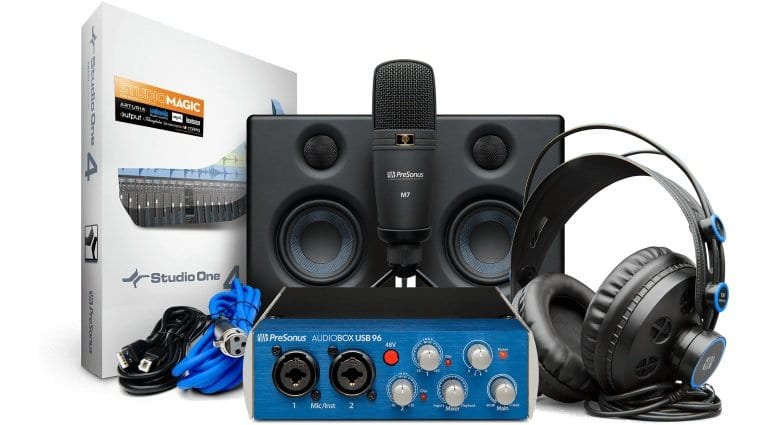 Let’s be clear: The existing Audiobox bundle did include Studio One, but this is one upgrades that component to version 4. It’s a very capable platform which offers unlimited audio tracks, MIDI tracks, virtual instruments, bus and FX channels, along with a collection of 25 integrated effects. On top of that, there’s the Studio Magic Plug-in suite which contains some well-known plug-ins by the likes of SPL, Lexicon, Eventide, Brainworx, and Arturia.

As for the monitors, the Eris E3.5 are full-featured, but compact. Each one has rear-panel 1/4-inch TRS and RCA inputs, front-panel 1/8 stereo unbalanced line inputs for handling input from mobile devices, front-panel volume control, and an integrated headphone amplifier. There are also low- and high-frequency tuning controls. Amplification is rated at 25W per side, provided by a Class AB power amp.

With the addition of these two, PreSonus offers a complete studio setup suitable not only for voice/podcast recording, but for full-scale production. We don’t know of any manufacturer bundle that also includes the speakers. If you take the time and effort to “learn” this gear with its strengths and weaknesses, in addition to the intricate arts of mixing and mastering, you can hold onto this setup for quite a while, coming up with some perfectly good-sounding music along the way. With a USD 300 price tag, this recording studio is officially budget material. It wasn’t really possible to put together a studio setup of this quality a few years ago when the process of democratising music production was in its early stages. You can now, so take advantage of PreSonus’ thirst for competition.

The AudioBox Studio Ultimate Bundle is being sold now at PreSonus dealers. For more information, check out the product page on the company website.

Thomas B Young, i bought the USB Presonus but it had no reading material or disc in it so i have no way to get it up and running ?? I paid $ 139 Canadan