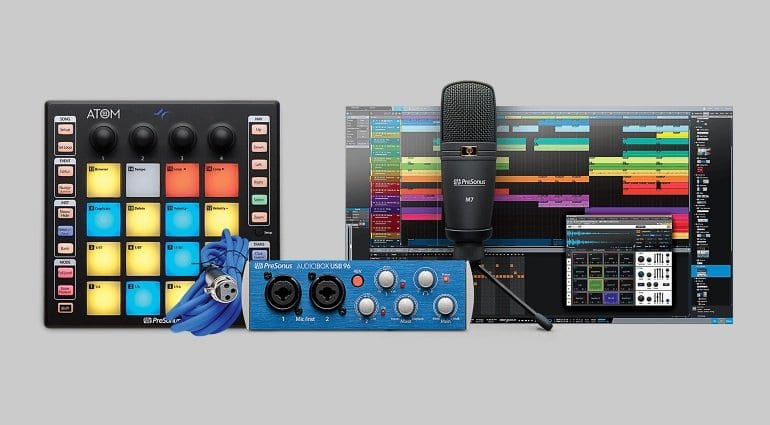 Presonus has announced the ATOM Producer Lab, a bundle built around the ATOM pad controller released last year. It includes an audio interface, a condenser microphone, DAW software, and even some cables to hook everything up. At just under USD 300, this looks like an excellent deal if you’re new to the game of making tracks.

Not too long ago, I would have called anybody crazy who told me that it would one day be possible to get this kind of bundle for under 300 bucks. Well, here we are… In addition to the ATOM pad controller, the ATOM Producer Lab includes the Presonus AudioBox USB 96 audio / MIDI interface, an M7 large diaphragm condenser mic, the Studio One Artist DAW software, additional loop sample content, and microphone and USB cables. The company calls it a “tightly integrated, all-Presonus production kit”.

If drum pads are your weapon of choice as a producer, you’ve probably already heard about the Presonus ATOM pad controller. It came out in 2018 and seeks to appeal to the same crowd that embraces tools like Ableton Push, NI Maschine, Novation Launchpad and the AKAI MPC and MPD series. The ATOM has 16 pressure-sensitive RGB pads, four programmable encoders, and 20 assignable buttons, which you can use for triggering samples and loops, as well as adjusting parameters. Of course, Presonus would like you to use its own software, which is why they’ve included Studio One Artist with the ATOM Producer Lab bundle. But the ATOM also works with most other DAW software. 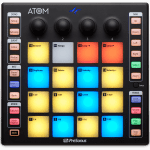 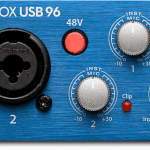 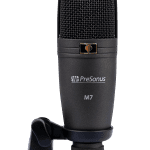 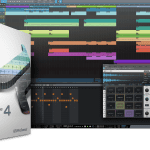 Any aspiring producer will at some point want to work outside of the box and record other instruments or vocals. That’s why the Producer Lab includes the AudioBox USB 96 audio interface. It features two microphone / instrument inputs with Class A preamps, and two outputs. The converters can handle a maximum resolution of 96 kHz / 24 bits. There’s also MIDI In/Out, in case you need to connect external MIDI instruments. Presonus says that the AudioBox USB 96 integrates seamlessly with Studio One. And just so you don’t need to make another trip to the store, they’ve included an M7 large diaphragm condenser microphone. Presonus claims that it works well for vocals and a wide variety of instruments.

To sweeten the deal even more, you get all sorts of accessories like a desktop mic stand and cables. Presonus also throws in an additional MVP Loops loop and sample library, as well as the Studio Magic Plug-in suite. Now that I think about it, it’s odd that they didn’t include monitor speakers like they did with the AudioBox Studio Bundle. But even as it is, the ATOM Producer Lab bundle leaves little to complain about for under $300.

The Presonus ATOM Producer Lab retails for about USD 299 or EUR 259. It is available now.