The Nembrini Cali Reverb modern high gain amplifier is Nembrini Audio’s latest plugin and is based on a certain American twin channel boutique amp. The amp software emulation also has a fantastic introductory price, so get in on the action while it lasts!

The new Nembrini Cali Reverb takes its design cues from the popular Mesa Rectoverb amp head. It comes with two independent amp channels that are meant to simulate the modern high gain tones those Mesa amps are renowned for.

It has separate controls for Gain, Tone, Presence, Reverb and Master, plus a three band eq section for each channel. Channel 1 has two modes: Clean, for tight and sparkling clear tones, or Pushed, for a more mid-gain tone. Channel 2 has three classic Recto modes: Raw for crunch and blues tones, Vintage for what is described as liquid and warmer high-gain sounds, and then finally Modern, for the heaviest, super-aggressive sounds that you would normally associate with heavier hard rock/metal styles. 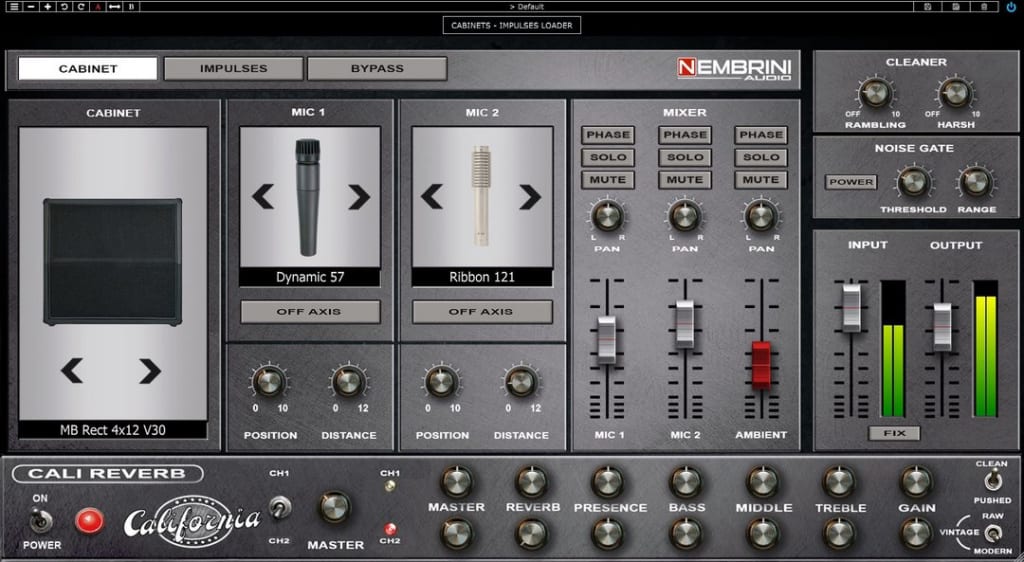 There are six different amp cabs to choose from with four mic emulations that have both on/off axis positions, plus continuous Position and Distance knobs. If you’re one of those players that likes to tweak their tones, this should give you a lot of useable options.

One of my favourite features is the Impulse Loader section, which allows you to load up to three third-party impulse responses. You can then blend them together using the volume, pan, phase, solo and mute controls to get the tone you are chasing after. Finally, there is also a handy Noise Gate section and a Cleaner circuit to help tidy up your tones.

The plugin runs on both Mac and PC using VST2, VST3, AAX or AudioUnits formats. You do need to authorise it via iLok though, which can be a bit of a pain to setup for some people. Though I will say, it’s a lot easier these days to get up and running and many plugins I use rely on it.

You can check out the official demo video below to get an idea of what to expect form this new plugin. For me, the launch price of USD 29 is a bargain and pretty tempting. However, Fluff’s Amped ROOTS recent free amp plugin already gives me all I need for modern high gain tones. But if you fancy that high gain Mesa sound, then this could be perfect for you. Don’t forget, the introductory price is valid until April 30, after which the price will go up to USD 137.