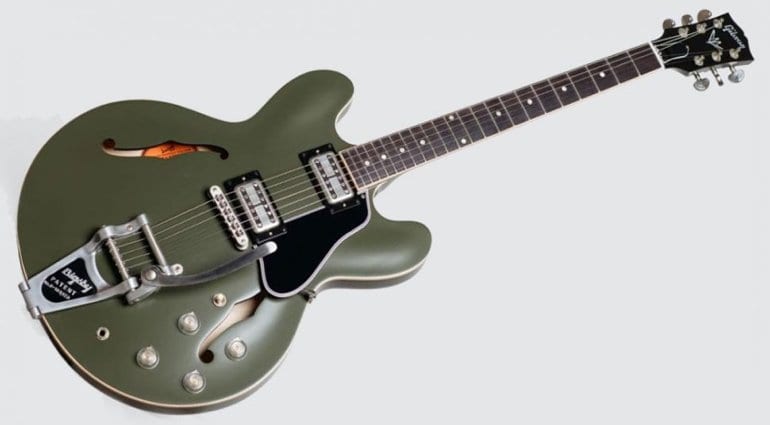 Gibson has announced a Chris Cornell Tribute ES-335 signature guitar that’s being launched tonight (!) in LA: A special guitar for a special occasion.

This limited edition instrument is being unveiled tonight at The Forum in Los Angeles in an event that will benefit The Chris and Vicky Cornell Foundation and The Epidermolysis Bullosa Medical Research Foundation.

Gibson is also giving two of the guitars away tonight at the show to raise funds for the two organisations. Only 250 Chris Cornell Tribute ES-335 guitars are going on sale worldwide. It’s obviously a very special occasion and, I think, a nice gesture on Gibson’s part. 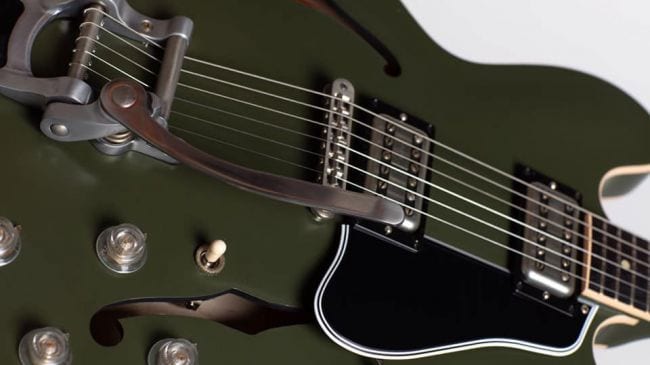 This is a reissue of sorts, as there was a limited run back in 2013 of the same model and it was very popular. So popular, in fact, that it sold out quickly and is now highly sought after.

I love the whole vibe and colour scheme of this guitar. That Olive Drab Satin finish is stunning. And it has a pair of aged Lollartron humbuckers, another winning component for me.

Members of Soundgarden, Temple Of The Dog and Audioslave will be at the Chris Cornell tribute concert called “I Am The Highway: A Tribute to Chris Cornell” later tonight. Hopefully, they can raise some money for the two foundations. Apparently, the Foo Fighters, Metallica and Ryan Adams will also be performing tonight as well, so it should be a great night.

Here at gearnews we wish those involved all the best tonight! We hope that his tribute to the late Chris Cornell brings some good to the world. The man was an inspiration to so many and had an amazing voice. He’s still missed by many and so it is nice to see him remembered in this fitting way.

We should hopefully see a few examples at the NAMM Show as well, so make sure you visit the Gibson stand and check them out.

Even if do not manage to get your hands on one of these new guitars, feel free to donate to the two foundations below. They are both doing great work and need support, so dig deep and help out.

Did you manage to get one of the Chris Cornell Gibsons?