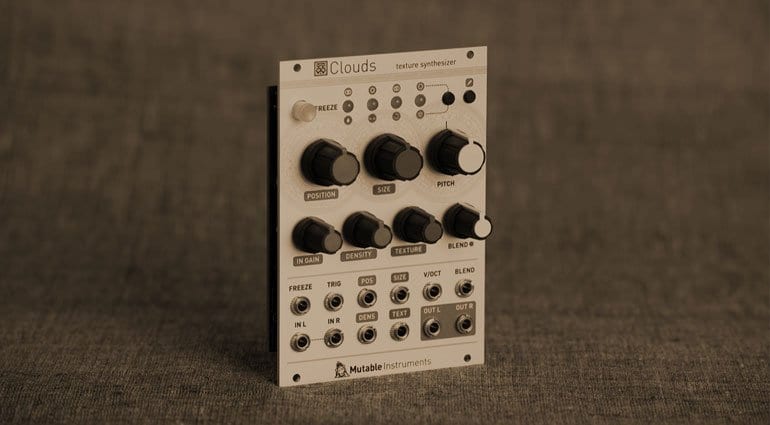 As I predicted we have another casualty from Mutable Instruments. This time it’s one of the most well regarded Eurorack modules ever produced. It turns up in everyone’s rack sooner or later. It’s as complex and interesting as it is beguiling and creative. Clouds is no more.

It’s really interesting to read Olivier Gillet’s explanation on Facebook. It gives real insight into the engineers plight and pursuit of excellence. Music gear gets discontinued all the time but what sets this apart and makes it news is Mutable’s approach. Clouds is unarguably a legendary module. It’s been recently copied into a smaller module called uClouds, it’s been adapted into a Max4Live device and turned up in the VCV Rack virtual modular. Anyone starting in modular synthesis will be aware of it and have it on their list of must-have modules. They could always sell it, it will always have customers and yet at the height of its powers they call it a day.

For all of us who love this weird and exotic granular module Olivier’s word come as a bit of shock. He’s really not happy with how it turned out. Maybe we’ve been idiots to like it so much. Or maybe I feel a little bit better about not fully understanding Clouds – it seems that it’s complex for all the wrong reasons.

However, there is a silver lining (see what I did there?). Olivier ends his explanation by saying:

Clouds has shown that live granular transformation is an important sound design tool in a modular system. There ought to be a distraction-free device to perform it. I’m currently building it.

So, unlike the discontinuing of Braids and Peaks, this time he seems to be working on something to replace it. He’s even mentioned something about February 2018. And I for one am pretty excited about that.