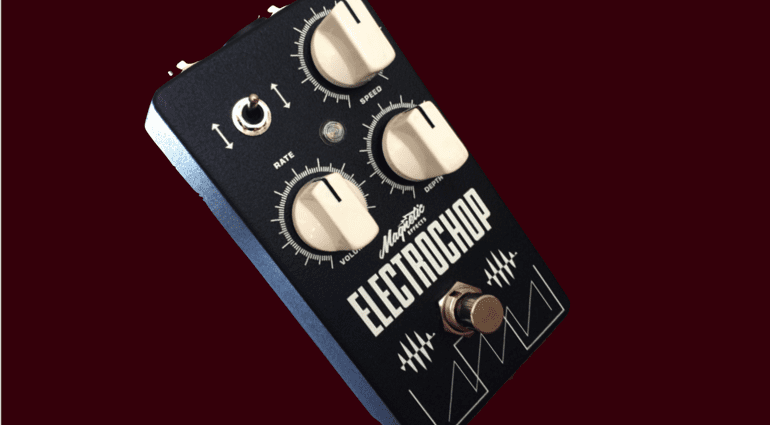 Magnetic Effects has just announced the Electrochop, its take on the unique-sounding VOX-made effect from the ’60s. This “really choppy” tremolo features the oddball LFO section of the VOX Repeat Percussion. Back in the day, this effect was often built into VOX guitars, and now it’s being made available as a pedal for you to add to your sonic arsenal.

The three main controls here are Volume, Depth and Speed. These allow more control of the tremolo parameters than the original Vox Repeater effect had. A toggle switch widens the overall speed range, so it appears as though the Electrochop will have a wider range than the original effect did. It also has a high input impedance and a low output impedance for compatibility with buffered pedals as well as pedal switchers and wireless systems. Again, these are all useful upgrades for a modern take on this classic ’60s effect.

Personally, I will forever associate the original VOX Repeat Percussion with Sonic Boom and the band Spacemen 3, as they used it so heavily throughout the band’s career. It was drone-like psychedelia that relied as much on space as it did on repetition. The Electrochop is seeking to emulate this choppy, gate-like tremolo.

This pedal is being built in limited numbers, and is the second time that Magnetic Effects has attempted this VOX circuit design. The original pedal came in a light blue, whereas this new box comes in a black livery. Magnetic Effects has designed a new circuit around the LFO, resulting in a tremolo that sounds very much like the Repeat Percussion but supposedly with a fuller, louder sound.

I have yet to hear the new Magnetic Effects Electrochop ‘in the flesh’, but I am very familiar with the original VOX effect. This pedal kind of excites me, as I grew up listening to a lot of Spacemen 3 records and love that choppy, hard tremolo effect (and I love vintage tremolo effects generally). I’ve been using a Boss Slicer pedal to achieve a similar effect for a while, but it is huge, so I am tempted to go out and buy one of these in the New Year and get my throb on!

Below is a brief demo of the original run of this pedal from 2013. The latest limited edition, however, is only available in black. I have also linked to a Youtube video by Derek See which gives a good overview of the original VOX Starstream XII guitar, which has the Repeater effect built in, so you can hear what all the fuss is about.