Designed and manufactured in London, England by Magnetic Effects, the newly released Sändare Overdrive V2 is a mild overdrive and booster effect derived from Magnetic’s Satellite pedal. And it looks like the designers have expanded the original concept in pleasing ways…

I wrote about the original Magnetic Effects Satellite pedal back in 2016. It’s being revamped, renamed and relaunched under the name Sändare (that’s Swedish for transmitter, obviously).

So what’s changed compared to V1? The Sändare still has Volume, Gain, High and Low controls. However, Magnetic Effects has added a Voice control that can be used to dial in a global EQ setting, giving you more control over how the pedal reacts with your guitar and amp set-up.

One thing I like is that the new version has an internal voltage doubler, taking it to 18 Volts. This will give you increased headroom and hopefully result in an improved signal path. It also has a high impedance input and low output impedance set-up, with true-bypass switching. All that makes for a well-designed signal path for an overdrive pedal.

With more headroom and less noise in the signal path, expect a nice touch-sensitive, dynamic drive pedal. This looks like it could easily be used as a boost or give you enough grit to give your guitar tone some edge. I’m also a big fan of top mounted jack plugs, as it makes for a tidier pedal board, especially if you have lots of units on your board. It makes cabling so much easier and more efficient. 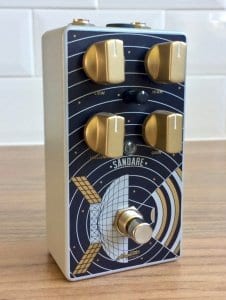 The official demo video below sounds pretty good. In fact, I think this British-built overdrive pedal has a lot going for it. If you’re looking for a pedal to add some subtle gain, this could just be what the tone doctor ordered. The fact that ToneReport gave the original version such a glowing review means that this revised version has a good reputation to build on..