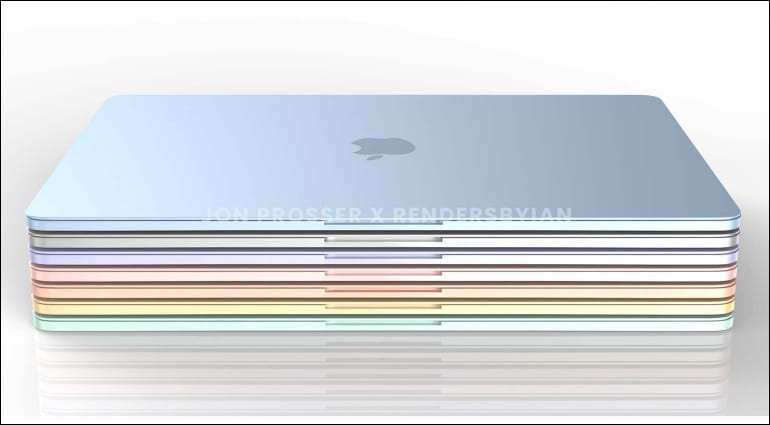 According to leaker Jon Prosser, Apple will be adding the MacBook Air in seven different colours, like the recent new iMacs (which he also predicted correctly). These new rainbow-coloured versions of the lightweight laptop will feature the new Apple Silicon M2 processor.

The next version of the Apple MacBook Air has been leaked. Or at least Mr Jon Prosser, who is known for quite precise predictions, has published some rendered pictures that are supposed to represent the new generation. Of course, these images were created graphically and do not correspond to the “originals”. Apparently, there will be seven different colours, just like with the recent iMac launch.

Another design innovation is the white keyboard and a white bevel around the screen, which mimics the new iMacs. There’s also a Touch ID built into the power on button.

These rumoured M2 MacBook Air models may also have two USB-C ports. Unlike the MacBook Pro (both on one side), these sockets will be on the left and right. It is not known whether the predicted MagSafe connection is already being considered here. Prosser speculates that Apple will attach two rubber strips to the underside, instead of four rubber feet. It looks odd, but they’ve had MacBooks with whole rubber bottoms in the past (the ones that pealed off), so it is possible.

What does this mean for musicians?

I’m running an M1 based system myself in my studio and it has plenty of power, even with only 8GB of memory (RAM). So if we do see an M2 based laptop towards the end of 2021, it could be a huge advantage to musicians on the move, as it potentially means more plugins and even more virtual instruments.

I’ve run some pretty hefty tests on my Apple Silicon system and, compared to my six-core Intel i9 system, the M1 can do way more virtual effects and instruments. So an M2-based portable is probably worth holding out for if you are planning to record and run a DAW setup.

4 responses to “Leak: Apple M2 rainbow coloured MacBook Airs: What does this mean for musicians?”