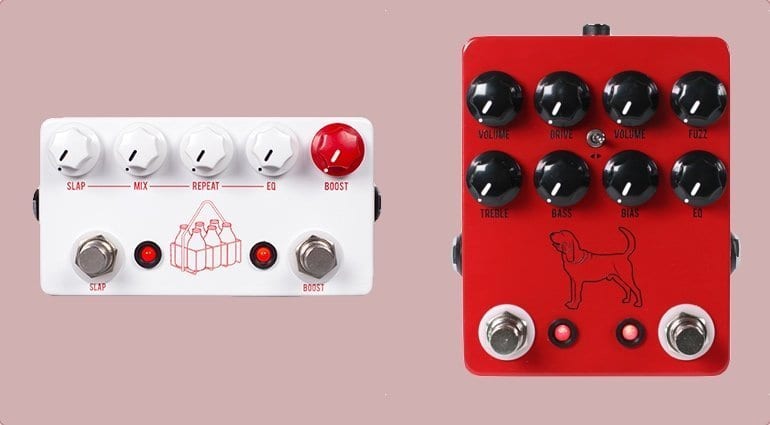 JHS pedals have cooked up two new effect units with the intention of adding some vintage-style cream to your guitar tones. The Calhoun V2 drive/fuzz was designed in conjunction with  Mike Campbell of Tom Petty fame, while The Milkman is a collaboration between Josh Scott of JHS Pedals and Tim Marcus of Milkman Sound.

Let’s start with a look at The Milkman. This is two effects in one, namely a preamp/boost and a slap-back echo, all of which are squeezed neatly into this fresh little package. The aim here is to give your guitar’s sound a good solid ‘always on’ amp tone. The boost is combined with a vintage-flavour slap-back echo. There is no wealth of options here, but the settings on offer are subtle and designed to complement smaller, single-channel valve amps.

The design is laid out beautifully and everything is labelled neatly giving you a nice simple control interface consisting of Slap, Mix, Repeat, EQ and Boost. It’s divided into two halves, with two foot switches, one for your boost and the other for your echo function.

The Milkman gives you a basic, amp-like tone and the discreet amplifier-based circuit might be interesting if you’re looking for some added character for your guitar tone. Add in a pinch of the ’50s style echo and you add some breadth, but without detracting from your core tone. Check out the official YouTube video below for an indication of what this new pedal can do.

Next up is the Calhoun V2, named after Mike Campbell’s dog. Yes, that’s Mike Campbell the producer and guitarist of Tom Petty fame. The Calhoun is essentially an overdrive and fuzz circuit, echoing the Milkman with its layout being divided into two sections.

There is even a limited edition of 100 units that sport a hand-painted design rather than the standard red version. Mike is donating his share of the profits from the Calhoun V2 to The Tazzy Fund Animal Rescue.

Judging by the demos, the overdrive section gives you a nice-sounding drive tone with a treble and bass eq section. On the Fuzz side, you get a simple fuzz, but with an added Bias control for starving the circuit of voltage and making it a bit more interesting. There’s also a toggle switch in the middle for choosing the order the effects are placed in. Again, I would suggest listening to the official demo video below to get an idea of what the Calhoun V2 can achieve. 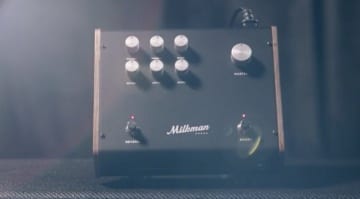