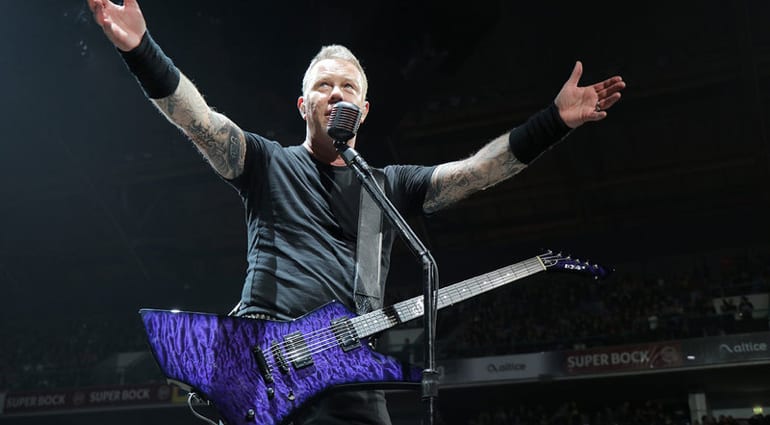 The ESP James Hetfield Snakebyte is Metallica frontman’s signature model guitar and fans have seen him toting a purple version on stage for the last six months. Now it looks like it may actually be released sometime soon…

Metallica fans have been arguing over whether or not the Purple Snakebyte will be getting a general release or not, and if it will be exclusively available as a Custom Shop model. Metallica’s official Facebook page has put up a video of James talking about his guitars and the purple version of the ESP Signature Snakebyte appears extensively towards the end, with Mr Hetfield referencing all the other members of Metallica having purple instruments, and that he was feeling left out!

The guitar in his hands has an almost PRS-like flame maple top and a gorgeous purple translucent finish. That’s very unlike James, as his guitars are usually either black or white, so it’s a departure to see him wielding a purple guitar. For now, this is all just rumours, as there is still nothing listed on ESP’s official page. But hopefully we will all get to see the Purple Snakebyte sometime in 2018!

Check out the official video below and watch out for the guitar towards the end of the mini-interview with Mr Hetfield.