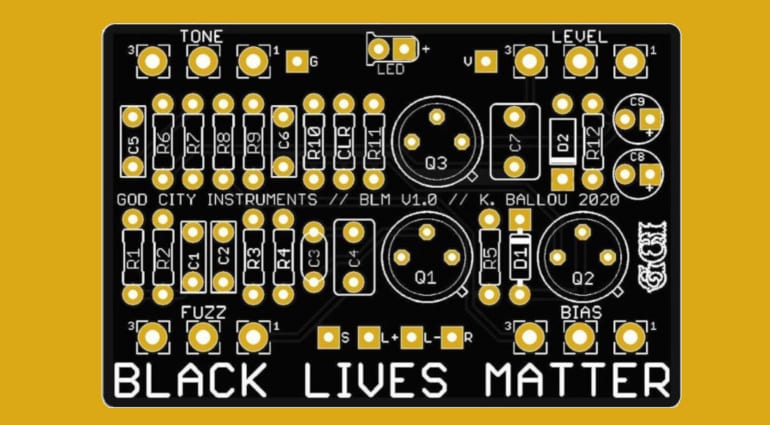 Over the last two weeks, global protests against racism and demanding an end to police violence against black communities have pulled people onto the streets in their hundreds of thousands. Now manufacturers of music gear have joined the fray. Builders of guitar pedals and other gear – including well-known brands like Old Blood Noise Endeavors and Chase Bliss Audio – have been finding creative ways to raise money for anti-racism charities. Many of these campaigns are still running, so if you fancy making a donation and at the same time winning a nice new bit of gear, check these out. Of course, you could just make a donation without taking part, too…

Have you seen one we’ve missed? Drop us a line on the Contact page or in the comments below.

Pedal builder Beter Bregman is giving away the very first hand-built prototype of his Manifold Drive pedal. This circuit inspired  the Resonant Electronic Designs pedals and provided the A side of Chase Bliss’s Brothers pedal. Your entry for the giveaway starts at $25.

#Repost to keep this top of mind. You’ve only got until Monday to get your donations in. ・・・ This is the very first Manifold Drive I ever built. It has a lot of meaning for me because it helped launch Resonant Electronic Designs (w/ @resonantelectro), and it’s the heart and soul of the Resonant sound, including the “A” side of the @chaseblissaudio Brothers pedal. It’s also the only one in existence built part-by-part on perf board. Lots of hours went into this one.⠀ ⠀ Lately, I’ve been wondering about what kinds of things I can do to help the world out. Well, I’ve been inspired by cool folks like @chaseblissaudio, @oldbloodnoise, @cooper.fx, @hawthornedrumshop, and others, so I’ve decided to raffle this sucker off.⠀ ⠀ Here’s the deal:⠀ -One donation of $25 or more to the below charities is one raffle entry (a $50 donation is two entries, etc).⠀ -DM me a screenshot of your receipt with donation amount with TODAYS DATE (6/5) OR LATER. Already donated money? You’re awesome. Donate some more.⠀ -I’ll pick a winner on Monday, (6/8).⠀ ⠀ Charities:⠀ @campaignzero @mnfreedomfund @naacp_ldf @actblueorg @visitlakestreet @aclu_nationwide

The remowned maker of pedals like the Blooper and Thermae has launched a giveaway of an Automatone Preamp MkII. To enter, email proof of your donation to one of the six charities it’s supporting, or send them an email detailing how you intend to fight police brutality. The company is also donating $1000 dollars to each charity.

We are expanding the charities we are supporting here. We have 6 full time staff at chase bliss and each of us has chosen an organization that you can donate to in order to be entered into the raffles. The options are @campaignzero, @blackvisionscollective, @mnhealingjustice, @unicorn.riot, Northside Funders, or AIOIC.org No purchase necessary for entry. To enter you can do EITHER (both is fine too, but only one is necessary to enter) 1) Email chaseblissdonations@gmail.com proof of a donation to any of these 6 organizations, any amount. 2) Email chaseblissdonations@gmail.com with a written paragraph on how you plan to fight police brutality in your community or the world. Either method (or donation amount) gives you *one* entry – even if you do both. No multiple entries allowed. Chase Bliss will also donate $1000 to each of these 6 charities. Winner will be announced on June 11.

4ms is pledging a portion of its sales this week to AFRORACK and Don’t Shoot PDX, a community education and advocacy based in Portland.

This is my personal gen loss. I’m going to raffle this guy off so it can be more productive. Please read on if you’re interested ______________ Following the cues of folks like @electronicaudioexperiments and @midfielectronics, for each $10 you donate you will be entered in a drawing to win this. For example $100 = 10 entries. Check link in bio for places to donate. I will match the highest donation. Email proof to tom@cooperfx.com with the subject line BLM. I don’t know what to say and I feel like my voice isn’t the one who should be heard. I just want to contribute some way. Thank you ❤️

This builder of boutique pedals based in New Zealand has pledged all the profits from his sales for seven days to the National Association for the Advancement of Colored Peoples Legal Defence Fund.

Self confessed creator of “goofy drum beats” Joel Nelson is selling a Volca drum sample pack priced at $10, with all the proceeds going to Emancipate NC. Buy the pack here.

Abominable Pedals is making a special PCB of its Hate Stomper boost, with proceeds going to the Black Lives Matter Seattle-King County Freedom Fund. Each unit is priced at $6.66!

$6.66 each NOW in the webstore – a new version of the Hate Stomper PCB with words all of us need to tattoo in our brains, “Black Lives Matter”. 100% of all money made will be donated to Black Lives Matter Seattle / King County for their bail fund. I had texted @godcitymusic to see if he wanted to co-release some DIY PCBs to raise money for BLM and he replied with a photo of the board he was working on already. He will be releasing a DIY board soon that will be available in the God City webstore so keep your eyes out!

A post shared by Abominable Electronics (@abominablepedals) on Jun 3, 2020 at 3:07pm PDT

I spent some time over the past few days thinking of ways I could use my resources to be more helpful in the fight for true equality of BIPOC people. One thing I came up with was this TB MKiii inspired DIY PCB. They’ll be available in the GCI shop just as soon as I verify the design works and sounds good. All profits will be split between massbailfund.org and bostondsa.org. Also, my pal and cohort @abominablepedals has a similar thing going with a special BLM Hate Stomper DIY PCB. Check out his store, please. PS. Please vote. Vote in every election no matter how small. We need to elect progressive candidates at every level of government from school committee right up to president if we’re going to turn the tide. #BLM #blacklivesmatter #fuzzpedal #diypcbetching

These purveyors of excellent pedals donated 100% of its sales revenues from 5 June to Black Lives Matter OKC – totalling over $50,000!

the response to the Black Lives Matter sale day was larger than we could have anticipated. and each one of you that bought something contributed in raising over $50,000 for Black Lives Matter OKC @blmokc. good job. we are definitely backed up on orders. please be patient while we fill these orders as it may take 7-14 days as we replenish parts and supplies. we’ll post confirmation this week once we’ve made the donation. now back to it.

Hey everybody. I am giving away a Hypersleep to support bail funds for protesters around the country. Here’s the deal: for the next 24 hours you can make a donation to the combined bail fund (link in my bio) and send me a screen shot of your receipt. For every $10 you donate you get an entry into the contest. I will be donating the full retail cost of the pedal as well. Thanks everyone. #blacklivesmatter

A post shared by John Snyder (@electronicaudioexperiments) on Jun 1, 2020 at 4:17pm PDT

Doug Tuttle also held a donate-to-enter raffle (now closed), with the lucky winner getting a pedal from the company’s catalogue (he chose a Pitch Pirate). The charities he supported included the George Floyd Memorial Fund, Campaign Zero and Minnesota Freedom Fund.

Donate to any of the above, send me a screenshot, and I’ll enter you in a drawing for a free pedal Friday. 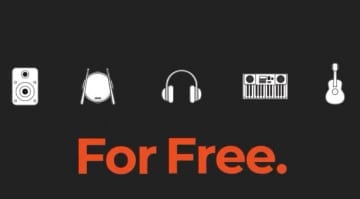 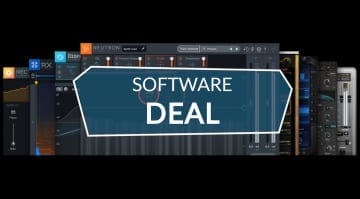 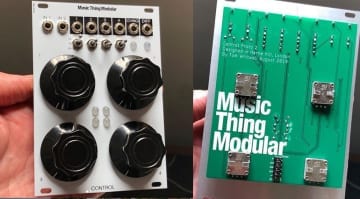 19 Jan · Where’s the backstop? I remember Steve saying they were looking into finally adding one.