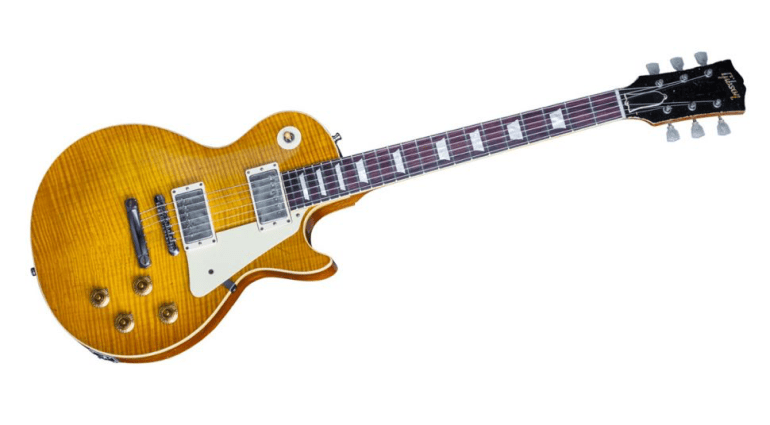 Rick Nielsen is famous for his work in Cheap Trick and Gibson are releasing the guitar in three different versions. The first one is an ‘as new’ gloss finish version; the second is an aged affair, which is supposedly an accurate replica of Rick’s favourite 1959 original that he still owns. The third version is a signed and aged replica. The guitars are a limited edition run and will appeal to the Cheap Trick fans and collectors, I would imagine.

The models all feature one-piece mahogany backs, one-piece rosewood fretboards and use a two-piece flame maple top to replicate the original guitar. All the specifications are those of an original ’59 Les Paul. Pickups are hand-wound Custom Bucker PAF which have allegedly been built to recreate the original pickups in Rick’s ’59 Les Paul as accurately as possible. The plastics on the guitar are also accurate and the whole thing has been described as “remarkable” by Rick himself. I think he was impressed by the level of detail that the Gibson Custom Shop managed to capture with this limited run of guitars.

The Gibson Custom Shop True Historic Rick Nielsen ’59 Les Paul models will all be available in time for the Musikmesse show in Frankfurt. If you are a fan of Cheap Trick and Mr Nielsen then they may just be the thing for you. But they are not ‘cheap’:

Find out more about the guitar’s specs on Gibson’s official site.